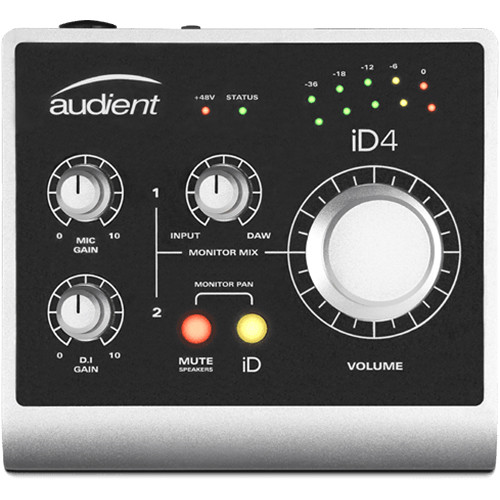 Last month I posted a review of the 2nd generation Focusrite Scarlett 2i2. Then Audient released the iD4 about the same time, so I decided to get one to see how it compares to the Scarletts since it’s in the same price range and Audient is known for having high-quality gear.

I already posted a comparison review between the Audient iD4 and the Scarlett 2i2 and 2i4, so check that for more about them and to see a video comparison.

For this review I’m going to talk about using the Audient iD4 specifically with a Windows 7 64-bit PC that has a quad-core i5 3.30 GHz CPU.

I mention that because overall performance with USB audio interfaces seems to strongly be tied to the platform and CPU that you are using.

The DAW that you use also has a big impact on performance. I use Ableton Live Lite 9 and Pro Tools 12. For some reason the iD4 works quite a bit better with Pro Tools on my system than Ableton.

When it comes to audio interfaces you never really know how they’re going to perform on your setup without trying them out, so take this review with a grain of salt because things might be completely different with your setup.

The first thing that jumps out about the Audient iD4 is the strong built quality. It’s metal all the way around, thick metal too, and it feels very solid.

The knobs also have a nice solid feel, with no wobble and they have a good amount of resistance so you can easily fine-tune a setting.

The volume wheel has infinite scroll in both directions. There are notches as you adjust it but you can fine-tune between notches as well, and if you press the wheel it drops the output level by 15db on the fly. There’s also a dedicated mute button that I find handy.

Tapping the iD button turns the volume knob into a mouse scroll wheel that can be used to adjust parameters and scroll through lists, etc.

I like the form factor of the iD4. It’s quite small, and the controls are on top instead of the front like most audio interfaces. The mic/line combo connector is located on the back, along with the main outs and the USB connector, so most of the cables stay out of the way.

On the front there’s a JFET D.I input for connecting guitars, basses, keyboards, etc. It’s designed to replicate the input stage of a classic valve amplifier, and it sounds very clear and precise.

The iD4 features the exact same Class-A microphone preamp found on Audient’s high-end console interfaces, which have a good reputation so you know what quality to expect.

The Audient iD4 also features a mix monitor knob that lets you blend audio playback with direct monitor. For me I want to hear guitar being played through an amp sim, not clean direct input, so I’ve never understood the benefit of such a feature. Sure there’s “zero latency” that way but it takes all the fun and creativity out of playing guitar.

The iD4 has dual headphone jacks, one for each size, which is a nice bonus. My only gripe with the headphones is the volume can’t be set independently from the main output volume; all are tied together. For me that means I have to remember to turn the volume down before putting on headphones or it’ll blow my ears off.

One thing that stands out about the iD4 to me is the sound quality seems to be a step up from the Focusrite Scarletts and other audio interfaces that I’ve used in the past.

The sound coming out of my Alesis Elevate 5 speakers just sounds better. The difference is subtle, but there seems to be more low end details and punch, even at lower volume levels, and highs sound a bit less harsh than I’m used to on the Scarletts. It’s not a huge difference but I’d rather listen to music out of the iD4; the Scarletts sound just slightly more dull and flat by comparison.

That’s not a big surprise since Audient’s interfaces are known for having exceptional sound quality.

However, the iD4 doesn’t use the same converters as Audient’s other interfaces such as the iD14 and iD22 that feature highly-regarded Burr Brown converters.

There’s a forum post from an Audient rep that explains the converters used on the iD4:

They come from a Japanese company called AKM and are already used in many other high end German and American products which can cost over 5 times the price of the iD4. The chip we use is called a CODEC and essentially means that the A/D and the D/A are both situated on the same chip. This is great for two reasons, component size and power consumption.

However, we always take the audio quality of our products very seriously so a lot of testing, circuit tweaking and listening took place before we chose these particular converters. We didn’t want to compromise the audio quality of the iD4 just because of its smaller form factor and lower cost. Burr-Brown don’t offer a CODEC with the Performance/Price ratio that we would have wanted for iD4, so while we are huge fans of the work Burr Brown does, the AKM converters were much more suitable for the iD4’s Application this time around.

You can even look for yourself on the published specs for both the iD4 and iD14 and see that despite the lower cost and size, from an A/D perspective, the iD4 will still give the iD14 a run for its money. Even improving on the THD figures in some cases.

Considering the fact that I really like the sound quality of the iD4, it makes me wonder what the iD14 sounds like…

For me the weak link with the Audient iD4 has turned out to be latency. I like everything else about the iD4, but the overall latency numbers just don’t stack up to other audio interfaces in the same price range.

The 2nd gen Scarlett interfaces basically have half the overall usable latency as the iD4 on my computer. Here’s a separate latency comparison review for more details.

If the iD4 would run at the lower buffer size settings on my PC the latency wouldn’t be a problem at all, but unfortunately that isn’t the case. Even at 0% CPU usage the 64 samples setting with 4.6 ms of overall latency crackles constantly. 128 works better with 9.3 ms of latency but it starts to flake out with higher CPU usage. Even the 48kHz/256 setting starts to crackle when pushing the CPU hard.

The 2nd gen Focusrite Scarlett 2i2 runs fine at those same settings even past 90% CPU with the same PC so the computer isn’t the problem. I’ve already gone through all the optimizing and DPC latency tests; the computer is setup well for audio. If I drop the 2i2 down to 32 samples (which has 5.1 ms of overall latency), it will start to crackle but not until it’s above 50% CPU, so the setting is still quite usable, unlike the iD4’s lowest setting.

On the plus side, the performance of the iD4 has been great on my computer. I haven’t experienced a single bug or issue while using the iD4. No bluescreens, no freeze-ups, no sudden loss of audio, no random CPU spikes like I’ve gotten with the 2nd gen Focusrite 2i2.

One minor downside with the Audient iD4 is that it doesn’t come with any bonus software like most audio interfaces. Usually you get a basic DAW or a few plugins to get started, especially with entry-level interfaces geared toward beginners.

Luckily there are plenty of free DAWs and free plugins available online anyway.

Additionally, the iD4 doesn’t come with mixer software like the iD14 and iD22 that enables some added controls for things like latency and mixing.

The Audient iD4 is the 3rd USB audio interface that Audient now offers.

The Audient iD14 was released last year. At $299, it sells for $100 more than the iD4. It adds a second mic preamp, Burr Brown converters, a software mixer, and optical input for expansion via ADAT or S/PDIF, which can add up to another 8 inputs.

The Audient iD22 is their larger desktop interface. It adds more options for ins and outs, along with insert points for integrating outboard gear, and some other extra features, but it’s a pricey $599, so the iD14 is probably the best overall value of the bunch.

I really like the Audient iD4. The sound quality is exceptional and it’s built like a tank, but because I can’t use it at the highest settings the latency isn’t quite low enough for optimally recording and playing direct input guitars and e-drums in live time.

If low latency isn’t super important to you then it’s not a big deal. Or if you have a higher-end computer with an i7 CPU perhaps you can avoid these problems, but for me the iD4 just doesn’t cut it with my i5 Windows 7 PC. I’ve settled on using the 2nd gen Scarlett 2i2 because of the lower latency and the fact that I can push the CPU much harder without causing audio problems.

Hopefully Audient will continue to develop their Windows drivers to lower latency numbers and improve performance because the iD4 is a really nice audio interface otherwise.