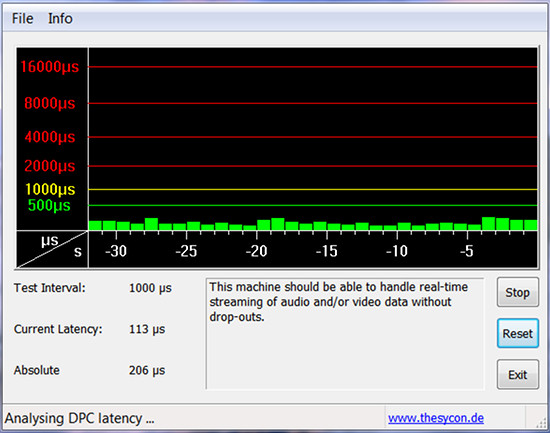 If you have a Windows computer that you’re trying to use for any kind of audio recording or production, you’re more than likely going to experience some problems with audio crackling, popping, or dropouts at some point.

When you first get a new audio interface or switch to a different model it’s not uncommon for problems to crop up.

The audio glitches and dropouts might not even have anything to do with your audio interface.

Something unrelated like a wireless card or an anti-virus program can cause all kinds of problems.

When I started getting into recording music on my computer I ran into some problems at first.

It turned out my wireless card was causing major DPC latency spikes. I have a cheap TP-Link wireless adapter and the drivers they provide for it are old and outdated. Luckily I was able to track down an updated OEM driver that fixed the problem.

The card has slow download speeds unfortunately so I was looking to upgrade it this past week with an Asus PCE-N53. After installing the Asus card it was causing all kinds of DPC latency spikes, and after a bunch of wasted time I was unable to find a better driver for it so I had to go back to the old card. On the plus, uninstalling it and reinstalling has got it running better than ever with full download speeds, so I guess it worked either way.

However, it doesn’t end with DPC latency. There are other Windows routines that can cause audio clicks and dropouts too, like hard pagefaults.

Today I discovered that Comodo Internet Security is causing lots of hard pagefaults on my system. Disabling the process improved audio performance with the new Audient iD4 audio interface that I just got yesterday (review pending).

The funny thing is the issue with Comodo doesn’t cause any problems with my 1st or 2nd gen Focusrite Scarlett interfaces, so a lot of it depends on each brand and their individual drivers.

Before you send back your new audio interface or smash it with a sledgehammer due to poor performance, use the programs below to test your computer for common problems that can cause audio issues.

LatencyMon – This free program will analyze the performance of your computer and tell you exactly what is causing excess latency and other issues related to ISR and DPC routines as well as hard pagefaults. It works with Windows Vista and up.

DPC Latency Checker – Here’s another program that can test DPC latency on your computer but it does not list the offending drivers like the program above, so you have to manually go through and disable them to find the culprit. It works with Windows 2000 through Windows 7.