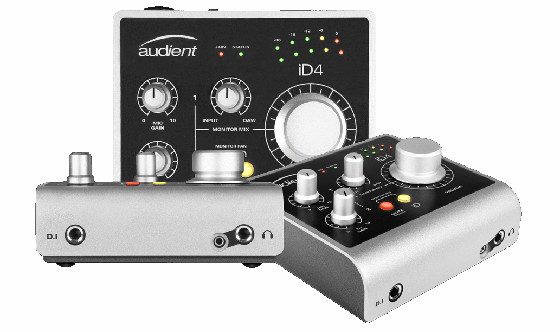 The Audient iD4 features one class-A mic preamp on the back and one JFET D.I. instrument input on the front, with dual headphone outputs, phantom power, and balanced speaker outputs.

It also features an “all-metal construction” so that’s a plus for the build-quality and durability factor.

The iD4 appears to be another really good option for a high-quality USB audio interface, possibly the best option for under $200.

Audient’s preamps and converters tend to have a better reputation than other sub-$200 interfaces.

I’m tempted to give the Audient iD4 a try after having problems with the Windows drivers for the new 2nd gen Focusrite Scarlett 2i2.

At $199, the new iD4 is only $50 more than the Scarlett 2i2 and the same price as the 2i4. It looks like Focusrite and other brands have got some new competition in the budget category.

So far B&H is the only place that has the Audient iD4 listed for sale and it’s currently available as a pre-order.

Update: The iD4 is now in stock and shipping from a few authorized retailers, including from Pitbull Audio on eBay. They are available on Amazon now as well. I ordered one so check back soon for a full review and a comparison between the Focusrite Scarlett 2i2 and 2i4.

You can find more info and tech specs on the Audient website for the iD4.