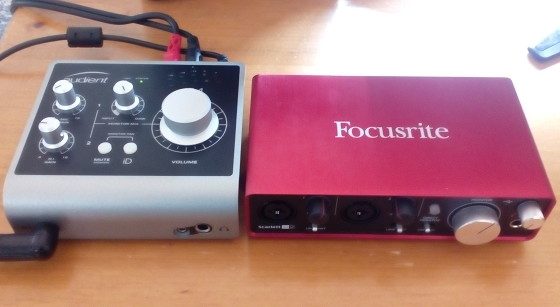 For this review I’m going to be comparing the Audient iD4 against the Focusrite Scarlett 2i2 and 2i4.

All three are bus-powered USB audio interfaces that share a lot of similar features. The price is the same for the iD4 and 2i4, both sell for $199, and the 2i2 is $50 less.

Last month I posted a review of the 2nd gen 2i2 and a comparison between it and the 1st gen 2i4.

I first started out with the 1st gen Scarlett 2i4 but when Focusrite released the 2nd gen models with much lower overall latency I decided to get a 2nd gen 2i2.

The 2i4 runs flawlessly on my setup so I just assumed the 2nd gen models would be the same, but there are still some bugs with the Windows drivers for the 2nd gen models so I wanted to try the Audient iD4 to see if it was any better.

Unfortunately it has some imperfections as well, mainly not being able to run at the highest settings, so there is no clear winner in this comparison review. In fact it’s surprising just how similar the Audient iD4 and Focusrite Scarlett interfaces are overall.

Note: These are my personal results comparing the iD4 with the 2i2 and 2i4. Audio interfaces are a tricky thing, so take this comparison with a grain of salt. Overall results and general performance may differ greatly on other computers and with different software. You pretty much have to test audio interfaces with your own specific setup to know if they’re going to work well or not.

You can compare the specs between these audio interfaces on the Audient website and Focusrite website. I don’t know what most of that crap means so I won’t be referencing any of it here.

Also note that I’m comparing the 2i4 as an interface only, not as a 1st gen vs 2nd gen thing. The 1st gens will be phased out so this comparison applies to the 2nd gen interfaces in terms of performance, features, etc.

Both brands offer solid build quality with metal casings and knobs. Both feel very sturdy and well made, so there’s no clear winner here.

The Scarletts win this category because they both have 2 combo jacks whereas the iD4 has one combo jack and a dedicated D.I input, so the iD4 cannot record two mics at the same time, for instance. The 2i4 also adds MIDI in and out, RCA outputs, and a separate channel for headphones.

The 2nd gen Scarletts have the edge when it comes to overall latency. See this separate latency comparison review for a look at the numbers on Windows. The iD4 would be a lot closer if it worked at 64 samples but on my computer that setting crackles constantly even at 0% CPU usage.

I recorded a couple different basic guitar parts using direct input on both interfaces and I was totally surprised to find that they sound completely identical on my speakers and headphones.

Playing both tracks at the same time while switching the solo button between them sounds like a single recording. It’s crazy how identical the D.I. recordings sound. I included some examples in the video review.

First off, I don’t have the tools or the knowledge to properly compare two mic preamps. For the most part I don’t even work with vocals so I tried comparing a mic’d amp with both interfaces to see if there was a noticeable difference in sound. Then I realized how incredibly difficult it is to get the levels to match exactly so it’s pretty much a pointless endeavor.

The bottom line is there’s not enough of a difference between them for one to clearly sound “better” than the other. So you pick ’em. I’m going back to playing guitar; I don’t care about the minute differences between the damn mic preamps. 🙂

As far as headphones go, each has an advantage over the other so there is no clear winner.

The iD4 has the advantage of 2 headphones output jacks, one of each size.

When it comes to sound quality, again, there’s not enough difference for me to definitively say that one sounds better than the other. Both sound good and both have enough headroom to make you permanently deaf.

Both the iD4 and 2i4 have dedicated knobs to blend the direct monitor and playback signals to monitor without latency. The 2i2 just has a switch to turn direct monitor on and off at a 50/50 mix.

This is a real tricky one. I have no way to definitively compare them and it drives me crazy. At first I was convinced the iD4 sounded better but switching back and forth comparing them it’s so hard to tell the differences, and it’s not like I can listen to them at the same time.

I get occasional freeze-ups and blue screens because of bugs with the 2nd gen Scarlett drivers, but that hasn’t happened once with the iD4. I also have to frequently toggle the buffer size setting with the 2i2 to fix CPU spikes.

The iD4 has a couple of extra unique features that separate it from the Focusrite Scarletts. First, the iD4 has the option to pan the DI and mic inputs from left to right to get a balance of both in your headphones.

Secondly, the iD4 has a feature that lets you hit a button to switch the volume dial to a scroll wheel to use with plugins and anything else that works with a mouse scroll wheel (that’s what it gets mapped to).

Doing this comparison review still hasn’t helped me decide which one to keep. The lower latency of the 2nd gen 2i2 is a big advantage for tracking guitars and e-drums, but the issues with the Windows drivers is a major turn off (it just triggered another blue screen doing this comparison).

If the Audient iD4 would just run smoothly at 64 samples it would be an easy choice because then its latency is super low too. But with my setup 128 samples and 9.3 ms of latency is the best it can do, and even then there’s an issue with Ableton Live that causes crackling whenever the CPU is above 30%. With Pro Tools 12 it runs fine at that setting so it’s all rather confusing…

Update: After a few more days of testing, I’ve pretty much settled on using the 2nd gen 2i2 moving forward. The Windows drivers have some bugs but when it comes to actually using the interface for recording it works really well, no crackling, no drop-outs, it’s very reliable, even with high CPU usage. Being able to track guitars with only 5.1 ms of overall latency without a big CPU hit is the clincher.