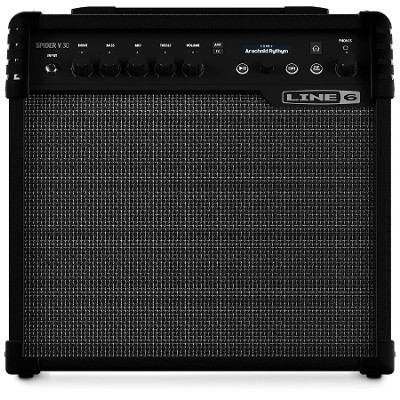 Line 6 released their new lineup of Spider V series modeling amps at the end of September 2016.

They replace the Spider IV amps and add a lot more effects (101) and amp simulations (78) for more control over the tone.

The Spider V amps also add built-in drum loops and a metronome, a full-range speaker system, a wireless receiver (except the V30), and offer direct recording into a DAW.

This review is for the Spider V 30 specifically but they all have the same built-in amps and effects, so the differences come down to hardware.

The V30 has an 8-inch speaker, the V60 has a 10-inch speaker, and the other two models have 12-inch speakers, with the V 240 having two. Plus they come with tweeters for full-range sound.

I decided I wanted to try the new Line 6 Spider V amps because I use amp sims all the time and I like the idea of having a small amp with a bunch of amps and effects built-in to use for practicing. That way I don’t have to be tied to a computer, a computer monitor, an audio interface, and speakers every single time I want to strum a guitar.

At first I thought the new Spider V amp pretty much sucked (and still do) because I really don’t care for most of the presets, especially the metal presets, and the interface is awkward to navigate from the amp itself. But once I got used to using the Spider app for editing the signal chain, it became easier to create acceptable tones. Still not good tones, mind you, but something that you can at least jam with.

There are 78 amps and 24 cabinets, 4 mics, and over 100 effects. It takes a lot of time to work through all that. Some of it’s good. Some of it sounds like crap.

Ultimately I think the Spider V 30 makes for an okay practice amp but the speakers leave something to be desired and I would rather use other amp sims like Thermionik and Amplitube 4 for recording because they sound better and it’s a heck of a lot easier to customize the tone after recording than it is before recording. The Spider V is good for recording rough drafts quickly, though, once you have some presets setup how you like. But there’s no getting around the fact that the amp sounds pretty shitty overall.

Here’s a rough draft of a song that I recorded using the Spider V 30.

There is no processing or EQing done on this recording; it’s recorded straight from the Spider V 30, with EZdrummer on drums and a free bass amp sim for bass. The guitars sound better with an EQ to get rid of some of the buzzing and to bring out the mids more but I wanted it to sound like it is on the amp so there is no processing.

The Spider V amps have a wider range of simulations than the Spider IV amps. There are way more onboard effects and amps included, and they added a metronome and drum loops to play along to.

One of the most important new features with the Spider V series amps is the addition of the Spider Remote Editor app for iOS and Android. It lets you customize all the amps and effects, and is much easier and faster than trying to use the onboard controls.

See this page for a complete list of amp models and effects that come with the Line 6 Spider V amps. It’s the same software setup as the Line 6 AMPLIFi products. Unfortunately they aren’t using any of the newer HD gear with the Spider V amps so it’s basically the same outdated stuff from the Pod X3 days. It makes no sense. Why offer older sims when they have newer and better-sounding stuff?

There are simulations of all kinds of amps, including Fenders, Marshalls, Soldano, Mesa Boogie, Bogner, and a lot more. There are a bunch of different delay effects, compressors, distortion pedals, reverb settings, a noise gate, EQ, and plenty more.

The Spider V amps also come with Cubase LE 8 to record, edit, and mix music from a PC or Mac computer. You can use it to record the Spider V amp directly by connecting it via USB. The Cubase software is actually really good for being the intro version. It supports 16 audio tracks, 24 midi tracks, and it comes with some usable stock plugins. Add some drum software and a free bass plugin and you’re set to create full songs.