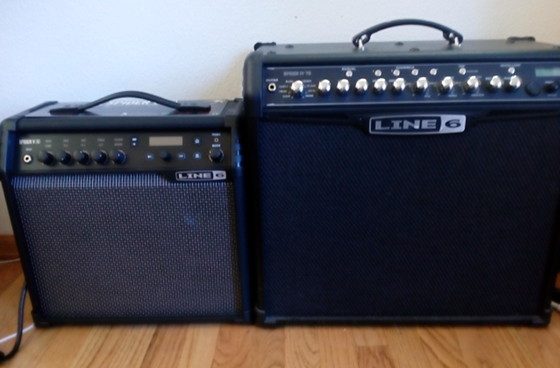 Line 6 Spider amps don’t have the greatest reputation among guitarists, but that hasn’t stopped them from being some of the most popular entry-level amps on the market for many years.

Now that Line 6 has released the Spider V series to replace the Spider IV amps, I wanted to put together a quick comparison review between them while I have both models on-hand.

According to the description at Amazon, the Spider IV amps have been out since 2009.

That’s a long time to go without an update so it makes sense for Line 6 to release a newer model.

Common sense would lead one to believe that a newer version would be clearly superior to its predecessor, but I’m not so certain about that.

Last month I posted a review of the Spider V 30 amp. Needless to say I wasn’t very impressed with it at all. The 8-inch speaker sounds weak and most of the included amp sims sound too digital and noisy compared to newer amp sim plugins for computers.

It turns out there’s a pretty good reason for that. I did some digging and discovered that the Spider V amps use the same simulations as the POD X3, which was discontinued over 5 years ago in favor of Line 6’s better-sounding HD gear, so that explains why the amp sims sound so outdated on the Spider V. Too bad they didn’t include their HD sims instead; it would’ve made the Spider V amps sound much better.

Line 6 claims they updated the modeling engine on the Spider V amps but I’m just not hearing it.

The Spider IV amps are based on Line 6’s older sims as well, so there’s not a big difference between the overall sounds, but the Spider V amps have a lot more simulations and effects available—and they offer way more tone tweaking options.

While the amp sims themselves sound somewhat similar between the two generations, the overall output sound is vastly different. The Spider IV amps sound way bigger and more amp like.

The Spider IV amps, from the 30 watt model up, have a 12″ Celestion speaker. The Spider V 30 on the other hand only has an 8″ speaker, a considerable downgrade. The V 60 has a 10″ speaker and the higher up models have 12″ speakers, so it might be a completely different story with them. But when comparing the V 30 with the 12″ speaker on the Spider IV it’s a huge difference.

The Spider V amps have “full-range” speakers, which also include a tweeter for high frequencies. But the low frequencies suffer greatly. There’s basically no bass whatsoever. The speakers are very mid-rangy and lack any kind of power (at least that’s how it is on the 8″ model).

The Spider V amps have a big advantage with the Spider remote editor app to fully customize the signal chain using a smartphone or tablet. It’s a lot more tedious adjusting parameters on the Spider IV amps, and there’s not nearly as many amps or effects.

The Spider V amps also double as an audio interface so they make it easy to record directly into your computer via USB, no mic needed. They also add some new features like built-in drum loops and a metronome.

The new Spider V amps definitely have some notable advantages over the Spider IV amps, but for me the downgraded speaker is a huge problem. Since I’d rather use better-sounding amp sims for recording anyway, I’m going to stick with the Spider IV for practicing because it sounds better and more amp-like than the Spider V 30.

See my Spider V 30 review for more details and some sound examples.

There’s a USB connection to connect to Android and iOS devices to tweak amp and effect settings, create presets, and control the amp.

Spider V amps can connect to computers via USB to record playback directly in a DAW.

The V 60 and up support wirelessly connecting a guitar using a Line 6 G10T relay.

Comes with Cubase LE to record and edit music.

The volume knob is much more consistent; the volume knob on the Spider IV goes from quiet to insanely loud with a turn of about 2 mm (it scares the shit out me on a regular basis).

The 12″ Celestion speaker and partially open back make the amp sound bigger and more resonant—open strings ring out more and palm mutes have more chug.

There are hardware buttons on the front of the amp to quickly switch between presets (they removed them from the Spider V for some annoying reason).

Over twice as many presets, and way more user preset slots (64 vs only 4 on the V series), and the presets sound better to my ears than the ones on the Spider V.

Faster and easier to navigate presets from the amp.

The knobs are classier and have a better feel.

Power button conveniently located on the front instead of the center back.