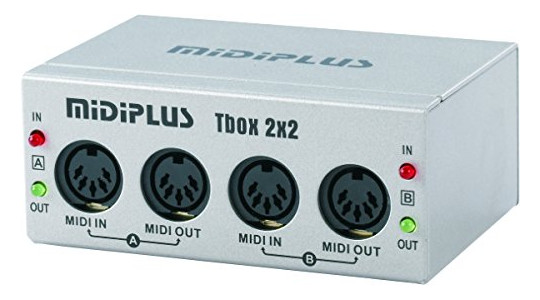 One question that frequently comes up, especially in regards to audio interfaces, is how to connect keyboards and MIDI devices and controllers to computers to use with DAWs and software instruments.

A lot of lower cost audio interfaces like the Scarlett 2i2 and Audient iD4 don’t have dedicated MIDI connectors, and that sometimes makes people question if they should get something more expensive with MIDI support.

The truth is there are a number of ways to connect MIDI controllers and keyboards to a computer.

In fact most connect via USB these days using a typical printer cable, the same as USB audio interfaces, so there is no advantage to connecting directly to the interface.

If your MIDI device only has MIDI connectors and USB isn’t an option, then you’ll need an audio interface with MIDI support or you can go the cheaper route by getting a USB to MIDI adapter.

There are cheap USB to MIDI converter cables available on Amazon for under $10 but the reviews are hit or miss.

The more expensive cables have better ratings but they sell for around $30. At that point you could get a 2X2 USB MIDI interface for the same price (shown in the picture above).

Audio interfaces with MIDI support start at around $75 with the likes of the Behringer U-Phoria and for a bit more there’s the PreSonus AudioBox and Steinberg UR22.

Having MIDI support on audio interfaces often adds about $50 to the price, like with the new M-Track C-Series interfaces from M-Audio and the Scarlett 2i4 from Focusrite, so if you need to save cash you can go the cheaper route and still get the same results.