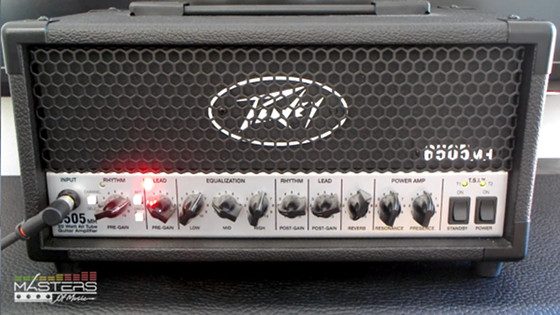 Last month I posted part 1 of the Peavey 6505 MH review with a list of pros and cons and some general thoughts.

I’ve finally stopped playing guitar (and video games) long enough to get a video review posted of the 6505 MH that includes a couple song examples and some demos of how the amp sounds on both the green and red channels.

Since posting part 1 of the review I changed the stock Ruby preamp tubes to JJ and that helped smooth out the distortion some, but it’s still a very harsh amp.

I also upgraded from a cheap 2×12 Harley Benton cabinet to a 4×12 Line 6 Valve cabinet.

There’s a big difference in the low end response between the two cabinets; you have to crank the resonance all the way up with the 2×12 to get any low end at all, and even then it sounds weak compared to the 4×12 with the same settings at noon.

The moral of the story is the cabinet makes a huge difference with the 6505 MH, more so than the tubes.

After using the Peavey 6505 MH for the past 6 weeks or so, I’ve come to the conclusion that I like the amp and find it quite usable but I don’t love it. For the price it’s hard to beat, and I especially like it at lower volumes, but overall the tone of the distortion is just too harsh for me, and the more you crank the volume the harsher it gets—with fast picking it’s like you can hear the scraping of the pick more than individual notes.

This was more evident when I found that I could use software preamps with the MH’s power amp and out through the cabinet. Jamming with the Thermionik dual rectifiers made me realize that I simply prefer rectifier tones better. But the Peavey 6505 MH is still a good tube amp if you’re on a tight budget and want something for metal but also with some versatility on the green channel for some usable cleans and nice bluesy, pushed tones.