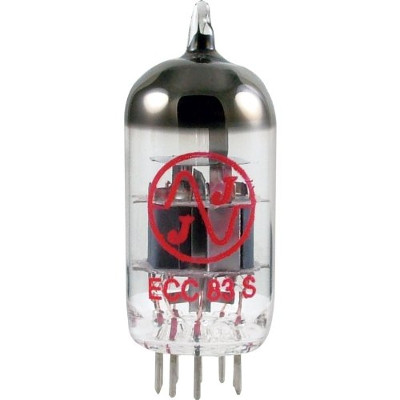 Earlier in the month I posted a preliminary review of the Peavey 6505 MH mini amp head, and for the most part I like it, especially at lower volume, but I didn’t like the tone of the distortion with the amp turned up above bedroom volume.

It would get a harsh, brittle edge to it, with a hint of crackling between notes that made it sound not-so-good.

There are some posts online (like this one) that suggest swapping out the preamp tubes for JJ tubes can help smooth things out with the 6505 MH and other Peavey amps.

Three JJ 12AX7 preamp tubes only cost $30 so I thought it was worth a shot.

The funny thing is the 6505 MH comes stock with JJ EL84 power tubes, but the stock preamp tubes are Ruby 12AX7s/ECC83s.

After swapping out the Rubys for JJs, there was an obvious difference in tone. I had been playing the Rubys for like 30 minutes right before the switch so the difference was readily apparent as soon as I started jamming with the JJs.

The JJs do help smooth out the distortion some. There’s more low end response, with more crunch in the mid-range, and it’s more usable now without a boost in front. Power chords are a bit more aggressive and single notes are more separated. The red channel has less noise now and sounds better at higher volume levels, but it’s still pretty grainy.

I went through a bunch of trouble trying to record the differences between the two brands, but the subtleties just didn’t come through enough in the recordings to post them. It’s the kind of thing you have to hear in person to get a real sense for.

One thing that did stand out with the recordings was the Rubys were louder. I was careful to keep all the knobs exactly the same on the amp while switching the tubes, and the mic wasn’t touched between recordings, so everything was exactly the same. However, the Ruby recordings had to be turned down by 1.1db to match the JJ recordings.

So far I like the tone of the JJs more. If you find the Peavey 6505 MH to be a little too harsh and bright I would suggest trying some JJ preamp tubes to help smooth it out. The amp is still on the harsh side tone-wise—it has a bit of a cocked wah sound to it—but the JJs help make it more balanced overall by taming some of the brittle edge and tightening up the low end. I like the amp better now with JJ preamp tubes, but it’s not a huge difference between the stock Ruby tubes.