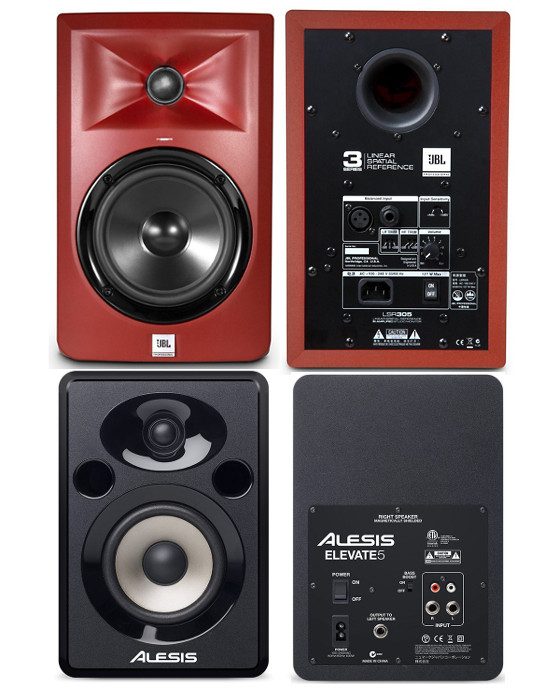 Last week I upgraded to JBL LSR305 studio monitors from Alesis Elevate 5 speakers while they were on sale at Musician’s Friend.

I wanted to put together a quick comparison review between the two brands now that I’ve got both on-hand.

I’m not going to do any in-depth tests and get all scientific about it.

I’m just going to post some general observations about the differences between them.

I’ve had the Alesis Elevate 5 speakers for about a year and a half. Here’s the review I posted last summer.

They sell for $149 as a pair so they are one of the least expensive options for 5-inch monitors.

The JBL LSR305 studio monitors sell for double that price at $149 each, so obviously they should sound better, but do they sound twice as good?

When I first fired up the JBL LSR305s there wasn’t as big of a difference between the Alesis Elevate 5’s as I was expecting.

The overall sound quality of the JBL monitors is definitely better, but it’s not blow you away better.

The JBL LSR305’s have a better sound at higher volumes; that’s one area where the balance of the Alesis speakers starts to fall apart. The bass is also a lot better on the 305’s.

One problem with the Elevate 5’s is they seem to exaggerate the bass a bit too much. Going back to listen to earlier mixes done with the Elevate 5’s the bass seems much too quiet. The 305’s have more punch in the low end and the kick drum stands out more, so that’s kind of the opposite of what you’d expect.

Another thing that stands out about the JBL LSR305’s versus the Alesis Elevate 5 is that mids are clearer. I can definitely hear rhythm guitars standing out more on the 305’s, which is a big plus since I primarily play guitar.

One thing I never noticed about the Elevate 5 speakers is they claim to have 5-inch woofers but the speakers look small next to the JBL LSR305. It turns out the Alesis speakers are only 4.25-inches.

The JBL monitors are noticeably louder and they have a lot more power. The Alesis Elevate 5 runs at 40 watts, with 120 peak, and that’s for both speakers (only the right is powered). With the JBL LSR305’s, each speaker has its own class-D 41 watt amp, so that’s twice as much power right there.

A couple of advantages (if you can call them that) with the Alesis speakers is they have a headphone jack and RCA connectors, both of which are absent on the JBLs. There’s also a bass boost switch, which can come in handy for other applications like video games and movies.

The JBL LSR305’s add XLR connectors and HF and LF trim switches to boost or cut lows and highs by 2db. Both have regular balanced TRS connectors as well.

The Alesis Elevate 5 is a good desktop or shelf speaker for listening to music and things like video games and movies, but they can be hard to use for mixing music because they aren’t true studio monitors. The JBL LSR305 is definitely a step up for mixing because they sound more neutral and flat, and the sound holds together better at higher volumes.

For $150 I think the Alesis Elevate 5’s are actually quite nice for the price. If you can afford to spend twice as much on the JBL LSR305’s you won’t be disappointed, but if all you’ve got is $150 then the Elevate 5’s aren’t bad to start out with.