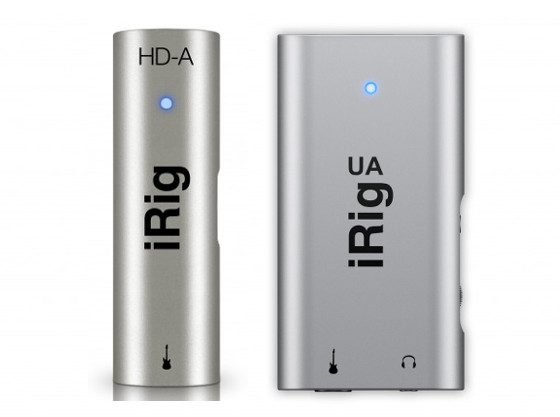 I spent a bunch of time yesterday trying to figure out the differences between the iRig UA and iRig HD-A so I wanted post my findings here while everything is still fresh in my brain. Note that this is not a hands-on comparison review; I just wanted to figure out which is the best one to get.

IK’s product pages don’t do a very good job of explaining the differences between the two, and other retailers’ pages leave out key details and they often have them miscategorized under iOS interfaces.

It seems there’s a lot of confusion about the Android versions of the iRig interfaces (maybe they should have called them aRigs); they get largely overshadowed by the iRig HD and other iOS-specific devices that are much more popular.

Android continues to lag behind iOS in terms of music producing apps and overall stability and functionality when it comes to audio production, so it’s not surprising to see less interest on the Android side of things.

But it is surprising to find such a lack of accurate information on these two devices.

Even Sweetwater, who are usually more accurate than most, have a number of things wrong with their iRig HD-A page, like the fact that it’s listed under iOS devices and the word Samsung isn’t even mentioned (a key omission).

The iRig HD-A and iRig UA both support Android devices and have a lot of overlapping features but there are a couple of key differences between them.

Note: I’m comparing the two versions as purchased from the IK store; I don’t think the same free software comes when purchased elsewhere. For example, the iRig UA sells for $40 cheaper from places like Amazon and Musician’s Friend but there’s no mention of the 25 free gear credits, free Amplitube Metal, etc.

#1. The iRig HD-A is mostly for high-end Samsung devices only, and devices that support Samsung Professional Audio.

#2. The iRig HD-A does not support the AmpliTube UA app, IK’s specialized amp sim package for Android. The HD-A only supports the Samsung version of the AmpliTube app.

#3. Compatible with devices that run Android 5.0 and up and support USB OTG.

#4. The product page says it supports PC but Mac is not mentioned.

#1. The iRig UA is compatible with a wider range of Android devices. It supports most devices running Android 4.2 and up that have USB OTG. It also supports Samsung Professional Audio Devices, same as the iRig HD-A.

#2. It works with the AmpliTube UA app for Android.

#3. Supports PC and Mac (the iRig HD-A lists PC support but not Mac).

#4. It comes with more free stuff, including 25 gear credits and T-Racks Classic in addition to Amplitube Metal, which is free with both.

#6. The iRig UA has a built-in digital signal processor (DSP) that processes everything internally instead of on your Android device to reduce latency and improve performance.

So what it all basically comes down to is the iRig HD-A is a specialty device designed mostly for Samsung phones and devices that support Samsung Professional Audio. The iRig UA is the better choice for other Android phones and tablets.

IK Multimedia has an ongoing promo through July 2016 where you can get AmpliTube 4 Deluxe for free with the purchase of an IK guitar interface.

AmpilTube 4 Deluxe currently sells for $239 so being able to get it for free with the purchase of a $79 interface is a pretty killer deal (especially considering that you can sell the interface if you don’t want it).