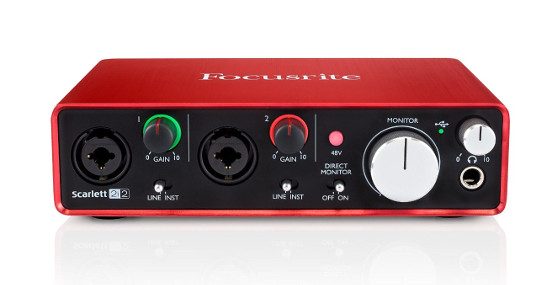 Among the new features on the 2nd gen Scarlett interfaces is the added support for higher sample rates and claims of “super-lower” latency.

I’ve been using a first gen Focusrite 2i4 since the beginning of the year. It works well and I really like it but I wanted to see how the new models compare so I ordered a Scarlett 2i2 to test out.

I’ll post a comparison between them and a review of the new 2i2 next week but for now I just want to focus on the latency differences between the two generations.

Getting lower latency is really important for certain kinds of projects, so it’s a pretty big deal when it comes to getting an audio interface.

So far my preliminary tests indicate much lower overall latency with the 2nd gen Focusrite Scarlett interfaces than the 1st gen models.

Update: It turns out the 1st gen Scarlett interfaces can work with the 2nd gen drivers for the same low latency settings, although they won’t work at the higher sample rates but the numbers are the same up to 96kHz. Also here’s the link to the full 2i2 vs 2i4 comparison review, along with the 2nd gen 2i2 review.

Here’s a look at the overall latency numbers according to Ableton Live 9 using a Windows 7 64-bit desktop PC (the numbers are the exact same on my crappy Windows 10 laptop as well):

The same settings on the 2nd gen model:

Update: Focusrite released new updated drivers for the 2nd gen model that changed the latency numbers that were originally posted here (see section below). The latency numbers are a bit higher with these drivers but they work much better and it’s still an improvement over the 1st gen models.

Middle-ground settings on the 2nd gen 2i2:

Below are the original latency numbers that were posted using the first set of drivers for the 2nd model, which didn’t work very well at higher CPU usage levels. But it does illustrate how low they can get the latency with these models.

Middle-ground settings on the 2nd gen 2i2:

Using a current project that I’m working on as an example, the 1st gen 2i4 and 2nd gen 2i2 use the same amount of CPU (about 45%) at the same 48kHz/64 samples setting, but the overall latency is less with the 2nd model, so you can use higher sample rate settings with the 2i2 and still have low enough latency to use less CPU power.

Everything comes with a price. I can run the 2i4 at the highest settings with no issues whatsoever. The 2i2 introduces a lot more crackling issues at certain settings. I haven’t had much time to test yet but it’s running well at 48kHz/64 samples. 32 sample rate settings are less reliable and a lot more prone to crackling. And the 176kHz and 192kHz settings are pointless; you can’t use much more than a DI bass with that kind of CPU hit. Update: Luckily the new drivers for the 2nd gen 2i2 fixed the crackling issues so that’s no longer a problem.