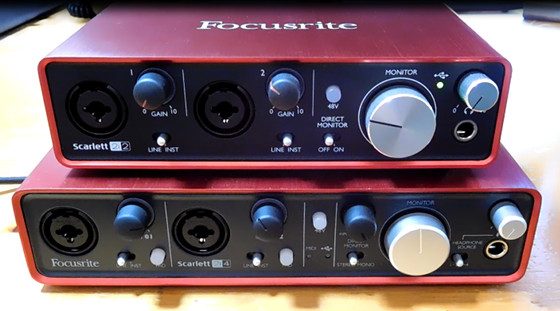 A couple of people have left comments over the past week saying that they were able to get their 1st generation Focusrite Scarlett interfaces to work with the Windows drivers designed for the new 2nd gen Scarlett audio interfaces.

So I went ahead and gave it a try and it’s true. The 2nd gen driver does indeed work with my 1st gen Scarlett 2i4. Crazy, huh?

The best part is the overall latency is just as low for the 1st gen as the 2nd gen (apparently the numbers aren’t accurate for the 1st gen, however—see comments).

Update: The 2nd gen drivers work with the 1st gen 2i2, 2i4, and Solo models, not the higher up Scarletts apparently…

Last month I posted a comparison review between the 1st and 2nd gen Scarlett interfaces, and by far the biggest difference with the 2nd gen is the lower latency.

Being able to take advantage of that improvement on the 1st gen is a major bonus.

To me it’s totally surprising that the 1st gen interfaces would work with the 2nd gen drivers. I’m sure Focusrite doesn’t want people to use them that way but it works nonetheless.

You can download the 2nd gen drivers from Focusrite’s website. This is reported to work on 1st gen 2i4 and 2i2 models. I’m not sure how or if it will work with the higher up Scarletts that use the Focusrite Control software.

To begin, you have to unplug the Scarlett interface from your computer and uninstall the 1st gen driver or it will just revert to using it instead of the 2nd gen driver (the 2nd driver doesn’t overwrite the 1st gen driver; they can both be installed at the same time).

I tested the 1st gen 2i4 using the 4.11.0 driver specifically and it was working just as well as with the 2nd gen 2i2, with a few exceptions…

Don’t try to use the higher sample rates from the ASIO control panel with 1st gen interfaces because that causes bluescreens. They support up to 96kHz only, but the 2i4 handled the new lower buffer size of 32 samples just fine.

As noted in my 2nd gen Scarlett 2i2 review, the 2nd gen drivers are buggier than the 1st gen drivers (at least on my system). Here are three tips that may help you avoid the same issues:

1. Make sure to close all audio applications before unplugging the interface from your computer, even if they aren’t running, or it may cause a bluescreen.

2. If the CPU starts spiking randomly and causing crackling noises, toggle the buffer size setting to fix it (for some reason I have to do this with Pro Tools sometimes but not with Ableton Live).

3. I had to turn off automatic screen timeout on my PC because sometimes when it would turn off the screen while audio was playing it would freeze up the PC.

At first I was really annoyed with these random issues, but now that I’ve figured out what causes them the 2nd gen 2i2 has been running great, and the lower latency is totally worth it for what I use it for.