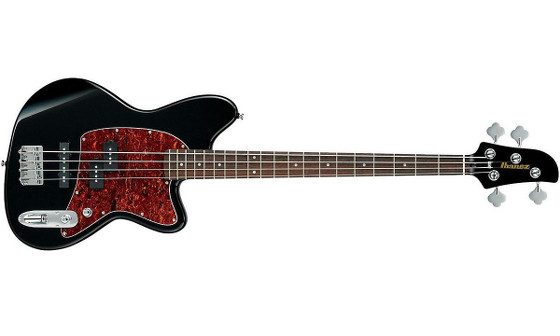 Earlier this year I posted a review of the Ibanez TMB-100 Talman Bass.

It’s a surprisingly nice bass guitar for under $200, although it’s a bit on the heavy side and it does need a basic setup out of the box. But it plays well and the active EQ controls give it a wide range of tones.

Mostly I use it to record directly into an audio interface and use free bass amp sims to shape the sound.

For several months I kept the Ibanez TMB-100 in standard tuning and it worked great for that, then I tried experimenting with some drop-tunings with varying results.

A lot of bass players like taking a four string bass and tuning it down to BEAD tuning, so it’s setup like a 5-string bass minus the G string.

So I bought a set of strings for a 5-string bass and proceeded to set the Ibanez TM-100 up with BEAD tuning using 130-65 gauge strings.

I had to file the nut down for the larger gauge strings. I used an older string to grind back and forth in the slots and that worked really well to file it down; it was much easier than I had expected and it came out really clean.

Unfortunately the act of changing the bass to BEAD tuning took a relatively nice-playing bass guitar and turned it into a clanking, flubby, irritating instrument to play and listen to. It turned up all kinds of fret buzz that raising the action never seemed to fix. The low B string was so loose that it would vibrate for like 30 seconds after plucking it.

In short, I just couldn’t get BEAD tuning to work well at all on the TMB-100. A professional could probably get it done but to me it sounded and played much, much better in standard tuning.

So I decided to keep the larger gauge strings on and try setting it up for drop C tuning to match one of my guitars. BEAD is really low compared to standard, so tuning it up to drop C was actually a huge improvement, being a step and a half up for 3 of the 4 strings.

That brought the Ibanez TMB-100 back to life. It’s almost like playing at standard again. With more tension on the strings it just plays and sounds so much better to me. The low C still clanks a bit more than I would like against the higher frets but other than that it sounds and plays great.

So in conclusion, if you’re thinking about getting an Ibanez TMB-100 Talman bass and are wondering how it will work for drop tunings, I’ve had good results with drop C tuning but I would definitely recommend getting something else for lower than that. BEAD tuning just felt so wrong on so many levels with this bass.