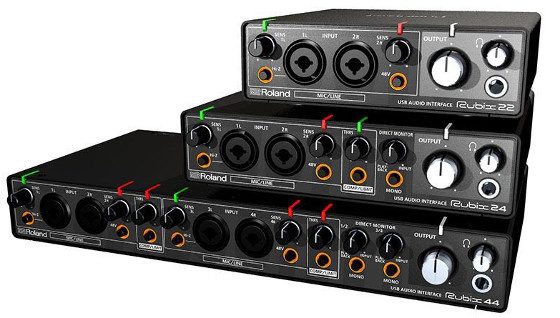 Yesterday Roland announced the upcoming release of a new line of inexpensive USB audio interfaces for PC, Mac, and iPads.

The new interfaces are called Rubix and there are three difference models, the Rubix 22, Rubix 24 and Rubix 44.

The Rubix series appears to be Roland’s answer to the popular Focusrite Scarlett interfaces.

They haven’t announced the pricing yet but I would expect them to cost about the same as equivalent models, so that most likely puts the Roland Rubix 22 at around $150 USD.

Hopefully these new Rubix interfaces will have similar low latency as the Focusrite Scarletts.

The Rubix 24 and 44 add a compressor and limiter to the hardware. Check the Roland website for more details regarding the new Rubix audio interfaces.