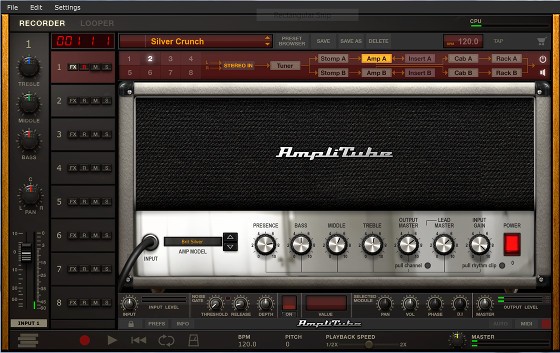 Here’s a quick to-the-point, no bullshit review of AmpliTube 4, devoid of the usual regurgitated marketing spiel.

At the bottom of the article there’s a video walkthrough that shows all the main features of AmpliTube 4 and includes some getting started tips to help make using the software easier.

Also don’t forget to check out the AmpliTube 4 Tips and Tricks Guide for more tips.

AmpliTube 4 was first released in October 2015, and is one of the more popular amp sims on the market.

It works with 64-bit PC and Mac computers, and can function as both a standalone program and as a plugin for most DAWs.

There are several different versions of AmpliTube available, along with add-on packs for specific gear like Mesa Boogie and Fender amps.

This review covers the entry-level version of AmpliTube 4. There’s also a deluxe bundle that adds over 115 pieces of gear and AmpliTube Max that includes all the add-on collections and all the gear.

AmpliTube 4 Review – What you Get

All the AmpliTube versions and add-ons make things a bit confusing, especially for beginners, so let’s start with what the base version of AmpliTube 4 comes with.

IK says that AmpliTube 4 comes with over 60 pieces of gear, but what they don’t say is that nearly half of that is available in the free version of Amplitube as well, so you’re not getting as much as they try to make you think.

Here’s the gear you get with Amplitube 4 that’s not available in the free version:

I wasn’t sure what to expect from the included amps because I mostly prefer high-gain amp sims that simulate Engl, Mesa and Peavey amps, but IK’s Marshall amps actually sound quite good, better than expected.

The presets don’t do the amps much justice but adding some pedals and effects and doing a little tweaking makes a world of difference.

The Brit Silver has some nice distortion and lead tones, especially when switching out the cab. The Brit 800 can roar with a tubescreamer in front, and I like the sound of the 800’s cab better than the others. The Red Pig has some good classic rock, bluesy tones. But it all depends on what sounds you’re looking for and what pedals and effects you use.

Personally I tend to favor IK’s Mesa amps over their British amps because they sound more powerful but it all depends on what kind of tone you’re going for.

Using AmpliTube 4 can be a lot of fun and it can also be quite annoying at first. It takes some time to get used to the interface and how to workaround IK always trying to sell you more gear.

There are a lot of things to learn at first, and the user manual doesn’t do a very good job of explaining details. But once you get used to the setup and learn the intricacies of using the software it’s pretty hard not to like AmpliTube 4.

Plus it’s nice to be able to save your entire setup from pedals to post-effects in one single plugin.

One thing about AmpliTube 4 is it’s not the best value compared to some other amp sims packages out there. Some offer a lot more gear for the price if you’re on a tight budget and don’t have a lot to spend. See the amp sims list below for a look at the prices of some other brands.

This video review is more about using the software itself than demoing what kind of specific guitar tones you can get, but I’ll probably upload some videos reviewing specific amps later as well.