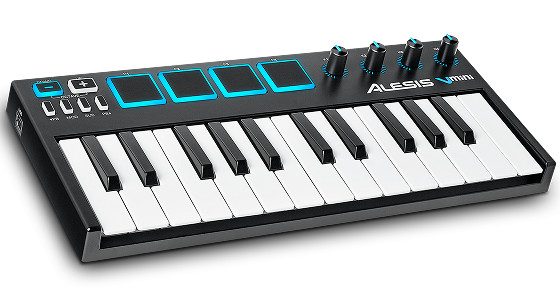 Both keyboards have 25 keys; the V25 has full-sized keys whereas the V Mini has mini keys, so the feel of the keys and the overall size difference is significant.

The V25 adds some additional features like extra pads and assignable buttons, but for the most part the functionality of the two controllers is largely the same.

The V Mini has a better default setup than the V25, which requires some tweaking of the velocity curve settings. The drum pads and keys have a good feel on the V Mini, and the velocity and sensitivity settings work well.

You can adjust all the settings with the V Mini editor software available on the Alesis website, but so far I haven’t changed anything because the default settings are good enough.

As first I was a bit skeptical about the V Mini’s keyboard because the mini keys feel a lot different than the regular full-sized semi-weighted keys that I’m used to, but once you get adjusted to them they work quite well. The knobs have a good amount of resistance to them, the pads have a nice responsive feel, and the buttons are fun to play around with, especially the sustain button.

The small size and extreme portability of the Alesis V Mini can’t be understated; it’s one of the smallest 25-key MIDI keyboards with pads available.

The price is the only real hangup with me. If it were like $59 it would be a no-brainer. But when it’s only $10 less than the Alesis V25 it doesn’t make much sense to get it for any reason other than the super small size.