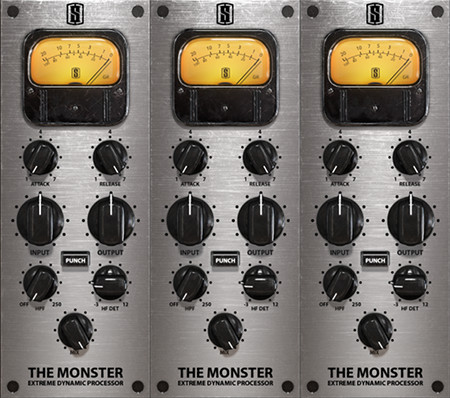 The folks at Slate Digital have released a really nice new free plugin called The Monster. The full name is mouthful but it gives you an idea of what it does: The Monster Extreme Dynamic Processor.

According to the description, The Monster is designed to emulate the classic “all buttons in” extreme compression sound of vintage FET limiter hardware.

Plus they’ve added some extra features to help tame the extreme nature of the hardware so that you can keep the Monster from overpowering your sound.

The Monster is already getting a lot of love from users. Some are calling it the “best free plugin” ever.

The only downside is that it requires iLok2 for activation, as do all Slate plugins.

They single-handedly managed to crash iLok’s servers after first releasing the plugin with so many people trying to activate it all at once.

If you want to get the free Monster plugin you have to download the full Slate bundle pack, which is about 700 MB, but you don’t have to install the entire Slate bundle.

They have three free plugins now, including the Monster, Revival, and Trimmer. So just choose those three plugins from the list, along with the Virtual Mix Rack at the bottom of the list to run them, if you don’t want all the other Slate plugins.

If you already have VMR installed then all you need to do is install the free VMR update that now includes Monster.