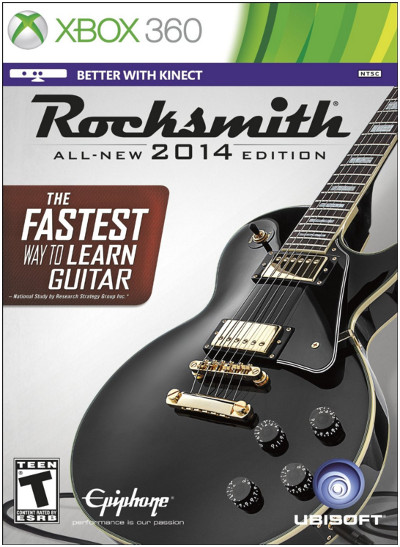 So a couple months ago I decided to buy the 2014 edition of Rocksmith, the latest version available.

I can’t begin to express my dislike for the game. Everything about it from the moment you turn it on with the annoying speaker-popping sound effects to the poor execution of the overall gameplay and utter lack of proper guitar teaching methods.

The game is clearly designed to pander to kids, and that’s okay given the medium, but they try to play it off like it’s some great learning tool for beginners all the way up to advanced players.

Here’s the into paragraph of Ubisoft’s description for Rocksmith 2014:

An independent national research study found that Rocksmith is the fastest way to learn guitar. Over 95% of players have improved their guitar skills. Whether you’re a beginner touching a guitar for the first time, or a seasoned player mastering your sound, Rocksmith gets you results, fast.

I call bollocks on that “study”, and I’m not even British.

I’ve been playing guitar on and off over a span of twenty years. The reason I got Rocksmith was because I thought it would be a fun way to learn some new songs.

I also recently started playing bass and I thought Rocksmith would be a good way to learn how to play both the guitar and bass sections of songs to get a better understanding of how the two instruments work together and play off each other.

The Problem with Rocksmith

First off, the jerkasses at Ubisoft fail to mention anywhere on the Rocksmith product page that you’ll need to buy an audio adapter for your system (Xbox 360 in my case) to be able to play the game without latency. They’re only like $5 but the game is pretty much unusable until you get the adapter. So 10 days later….

There are lots of things wrong with Rocksmith, but the core execution of teaching you how to play songs is the biggest failing. On easier levels, it only shows a few of the notes at one time. They often aren’t emphasized notes or notes on the beat, just random notes. The problem with this is you don’t know what patterns you are dealing with until it gets to higher settings. Your fingers and brain aren’t learning how the song really plays, just pieces of it in random weird ways.

There are lots of settings and ways to adjust speed and repeat sections, but the biggest thing for me is I can’t believe there’s no tab view to just look at the note patterns to learn them.

Instead you have to learn everything as the notes come streaming toward you all at once. It’s so much more of a pain in the ass than simply reading static tab notes from left to right, where you start learning all the notes and finger patterns from the beginning.

At one point I was literally Googling tabs for songs to see the real way to play them so I could keep up with the stupid game and not have to learn only 3 out of 8 notes per round, or having to learn all the notes coming and going at once.

Another big failing with the game is it doesn’t penalize you for hitting the wrong notes or extra notes. You can strum sixteenth notes when all that is required is eighth notes and it will give you a perfect score. You can get away with super sloppy play by doing the equivalent to finger-massing buttons on a controller.

I kept forcing myself to play this game to try and like it but it can’t be done. I gave it enough time to learn a few songs all the way through on bass. In doing so, I uncovered the biggest flaw with Rocksmith, at least for me. Away from Rocksmith I don’t know how to play the songs I learned hardly at all. You get too dependent on seeing the notes on the screen; the note patterns and fingering combinations don’t sink in nearly as much as when learning them from tab. It’s much easier to visualize static numbers on a grid than moving numbers quickly coming toward you on a screen.

I find Rocksmith to be the slowest way to learn how to play guitar. Maybe if you’re a complete beginner the gaming aspect could help open the door and make playing guitar more inviting but if you already know how to read tab you’re better off spending your money on some tab books (or Scribd’s $9 per month unlimited sheet music subscription plan).

I could literally write ten more paragraphs ranting about how much I dislike Rocksmith 2014 and all the various things wrong with it, but I think the point has been made…