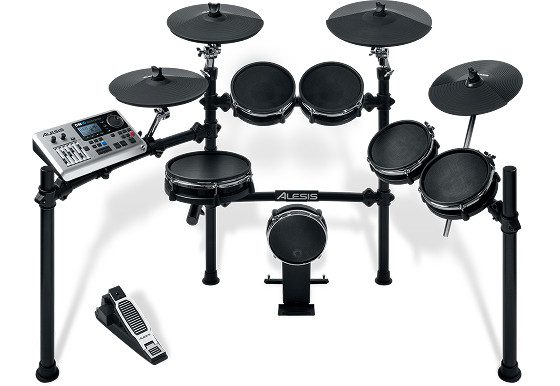 A few months back I bought an Alesis DM10 drum kit, my first electronic drum set. It has turned out to be a really cool drum kit so I wanted to put together a review and a video demo.

There are a few different versions of the Alesis DM10 drum set.

Another difference is there are two different size kits.

For this review I’m reviewing the Alesis DM10 Studio Mesh Kit specifically, but they all have the same DM10 module and basically function the same.

The upgraded DM10X kits have larger cymbals and pads, but the larger cymbals don’t really serve any purpose on an electronic drum set, and once you get used to the smaller toms on the studio version there’s really no need for the larger ones so either setup is equally functional.

I’m really glad I decided to get the Alesis DM10. It has turned out to be way more fun and functional than I expected. Before I got it I didn’t really understand all the benefits of an electronic kit. I had no idea how capable and versatile they have become over the years.

Initially I just wanted something cheap to trigger sounds using software programs, like the Behringer XD80USB, but I needed a double kick bass pad and a second crash cymbal, and at $100 each (at least), it seemed wiser to just pay a little more for the Alesis DM10 with the better mesh heads and better all around setup.

Except you’re not just stuck with one set of drum sounds with an electronic kit. There are 100 kits preloaded and you can create another 100 of your own to add to the presets. And it doesn’t end there either. You can interface with third-party software programs and create even more drum sets. You can design your kit for rock, jazz, metal, country, dance, R&B, blues—anything.

You can plug the kit directly into a PA system for playing live, or you can use amps, studio monitors, or headphones. It’s surprising how many more things you can do with an electronic kit than an acoustic kit, and if you want to use different cymbals, for instance, you just hit a few buttons to swap them out. That’s a heck of a lot better than having to spend $500 to buy new cymbals.