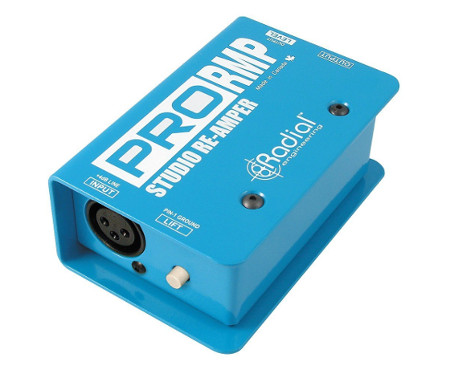 I came across a video demoing the difference between reamping DI guitars using a reamp box versus just using a cable plugged straight from the interface to the amp.

Now that I’ve got a Peavey 6505 mini amp, I was wondering how reamping works since I’ve just been working with amp sims for the past year.

Is a reamp box really necessary?

It turns out that using a reamp box isn’t required, but it sure sounds a helluva lot better.

You can get away with just running a cable from an audio interface to the amp but it’s going to be a lot noisier than using a reamp box, as the video below demonstrates.

The Radial ProRMP reamp box is pretty much the standard when it comes to reamping, and they sell for about $99 new.

Reamping definitely has some advantages. If nothing else it’s a good way to fine tune an amp’s sound. Trying to dial in the tone while playing is a pain in the ass, especially when it sounds different depending on how far away you are from the cabinet.

Here’s a video from Hop Pole Studios showing the difference between reamping with and without a dedicated reamp box.

Radial ProRMP Vs Just a cable