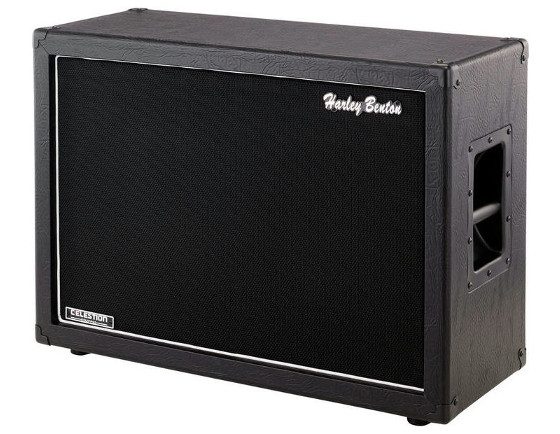 A couple months ago I bought a cheap Harley Benton 2×12 cabinet to pair with a Peavey 6505 MH mini amp that I recently got.

The cab turned out to sound pretty good for the price so I wanted to post a quick, half-assed review of it.

Why half-assed, you ask?

Well, I don’t feel like putting together a video or sound examples so a half-assed written review is all you’re going to get. 😀

The Harley Benton G212 Vintage is in fact the cheapest 2×12 cabinet that money can buy if you want a cab with Celestion V30’s, a popular speaker choice even on high-end cabinets.

The Harley Benton cab sells for a measly $200 from Thomann.de, a German retailer. They’ll even ship it to the US for an extra $32, which is insanely cheap considering the cab weighs over 50 pounds.

The craziest thing about the Harley Benton G212 Vintage is that it sells for less than it costs to buy just the two V30 speakers alone.

Typically Vintage 30 speakers sell for about $140 USD brand new, so two of them will set you back $280. Or you could just buy a Harley Benton G212 Vintage cabinet that comes with two V30’s for a grand total of about $230. It makes no sense! They’re basically paying you $50 to take the cabinet off of their hands.

Granted the build quality of the Harley Benton cabinet is probably about as low as you’re going to find, but it’s still quite usable.

I doubt it’s something that could stand up to being transported regularly on tour, but for an at-home practice rig it’s actually not bad.

Overall the cabinet sounds pretty decent at lower volume. It lacks a certain amount of fullness the higher you crank the volume, and the low-end response is rather poor, but it still sounds like a V30-equipped cabinet with that V30 flavor.

The tolex is rather cheap-looking and the seams have gaps but the cab doesn’t look bad, and the handles make it easy to move around.

I pulled the back off to take a look at the inside and there’s no denying the construction is cheap, but it does indeed come with real Celestion V30’s. The only odd thing is both of them had a large scratch across the nameplate. That makes me think they were most likely B-stock speakers and that’s probably the secret behind why Harley Benton can sell these cabinets for so cheap.

So would I buy it again? No, I probably wouldn’t. I’ve learned that when it comes to music gear you’re better off spending more for better quality. There’s a popular saying that goes something like, he who buys cheap buys twice. That’s especially true when it comes to anything related to guitars.

I only ended up using the Harely Benton cabinet for about one month before I replaced it with a 4×12 with V30’s when Line 6 had them on clearance for half price. I couldn’t pass up a new 4×12 for $350 delivered so the Harley Benton’s time was short-lived. The 4×12 definitely sounds better and fuller and the build quality is a lot better but I could’ve gotten along with the Harely Benton cab if I had to. It wasn’t great by any means but it was usable. If you’re on a tight budget it’s worth checking out.