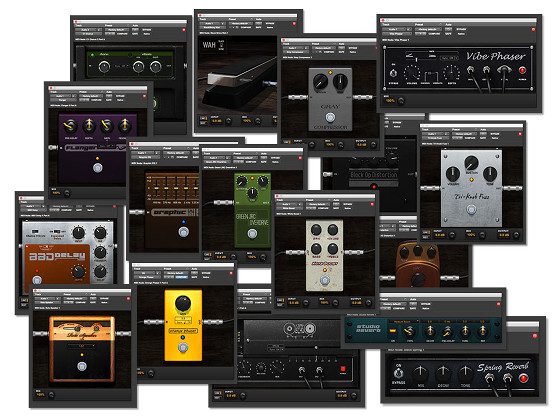 Avid recently started selling over a dozen different stompbox plugins for Pro Tools, with everything from distortion to reverb, delay, flanger and wah plugins.

Some of the pedals come free with certain Pro Tools plans, and Focusrite has the new Pro Tools First Creative Pack that comes with their Scarlett audio interfaces that includes several of the pedals.

I ended up with most of the stompbox plugins when Avid started offering them with Pro Tools 12, and some of the pedals are surprisingly good.

At $5 a pop they are a much better deal than some of the other stompbox plugins out there, like Plugin Alliance’s ridiculously overpriced $50 pedals.

I’ve been trying out the Green JRC Overdrive pedal in front of high gain amps like the Mesa dual rectifier and I really like it. It even makes the below average Eleven Lite amps sound halfway decent. The pedal is based on the original Ibanez TS-808 tube screamer pedal. It has a nice tight sound and it isn’t as noisy as some of the other tube screamer pedals that I’ve tried—it’s clearer and more natural-sounding.

The folks from Pro Tools Expert have free videos demoing some of the plugins to show how they sound and work.