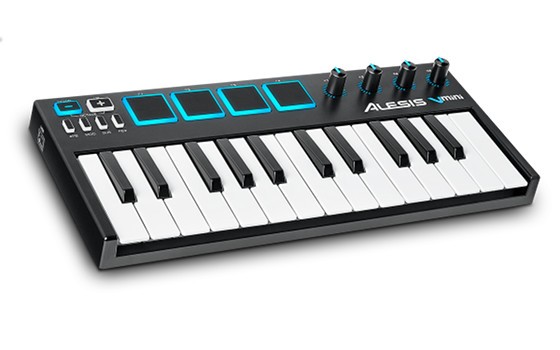 The little tike is aptly called the Alesis V Mini. It has 25 mini keys, 4 pads, 4 knobs, and buttons for octave up and down, modulation, sustain, and pitch bend.

The pads, buttons, and knobs have nifty blue LED backlights. The keybed has 25 velocity-sensitive keys.

The four drum pads are also velocity sensitive. The knobs spin 270 degrees, and can be assigned to different controls.

On the surface it’s a cool-looking portable MIDI controller, but there are a few notable problems…

First, it doesn’t look like it comes with Ableton Live Lite, or any other DAW for recording music, which is required to use the Alesis V Mini (not Ableton specifically, but a DAW in general).

The V Mini also comes with AIR Music’s Xpand!2, which is a nice little plugin with a ton of preloaded sounds that also requires using a DAW to function.

So basically Alesis is selling two products together that can’t function on their own without some other 3rd-party software. Brilliant! And they’re marketing it to beginners nonetheless.

A couple of months ago I reviewed the Alesis V25 keyboard controller, the regular-sized version. It’s a good MIDI keyboard for the price, but sometimes the pads register double hits.

It’s weird because all the regular V series keyboards come with Ableton Live Lite—pretty much everything does these days.

The kicker with the Alesis V Mini is that it sells for $79. That’s only $10 less than the full-size V25 that has more pads, more buttons, mod and sustain wheels, plus software to actually use the controller.

In fact the V25 often goes on sale for $69, so pricing the smaller version with less features and less software for $10 more doesn’t make a whole lot of sense, but then again portability is a bigger factor for some.