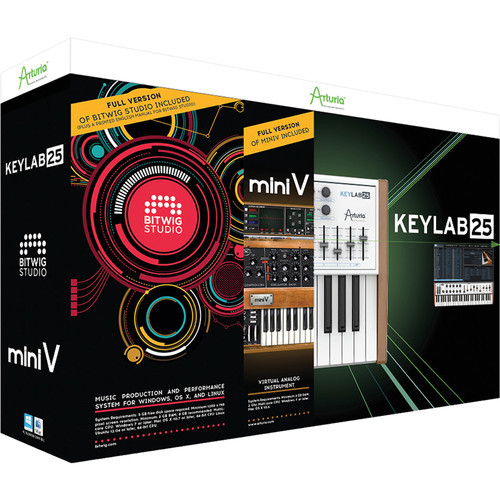 If you are just getting into music and are looking for a good starter pack or if you just want to get Bitwig Studio for super cheap, the Bitwig and Arturia Producer Packs are a really good way to save money.

Lately the the 25-key version has been selling for as little as $299 from websites like Amazon and B&H.com.

That’s a crazy good deal because Bitwig Studio alone sells for $299. It’s like getting the KeyLab 25 MIDI keyboard for free, plus it includes the Arturia Mini V and Analog Lab software that sell for $89 and $99 when purchased separately.

Even if all you wanted is Bitwig, this pack is the cheapest way to get it because you can sell the KeyLab 25 for good money. The KeyLab 25 sells for anywhere from $175 to $250 new on eBay and other retailers; it sells for $299 from Arturia directly. I’m not sure if the Arturia software is transferable or resellable but if you just use the Bitwig code it shouldn’t matter.

The Bitwig and Arturia Producer Packs are nothing new—they’ve been out since at least October 2014—but there seems to be limited availability of them, and they usually start at $349, which isn’t as appealing if all you want to do is get Bitwig for basically half price or less by selling the MIDI controller.

They also have Producer Packs for the larger Arturia KeyLab MIDI controllers, the 49 and 61 key models. Obviously they are more expensive so the savings don’t seem as good.

Software and hardware bundles are a great way to save money and are often the best way to get a fully functioning DAW for super cheap. I was able to get Pro Tools 12 through a similar bundle deal for $299 with an included audio interface, so really good deals like these can be had if you know how to find them. I’m tempted to take advantage of this deal myself. It’s basically like getting Bitwig Studio for around $100 after selling the KeyLab…