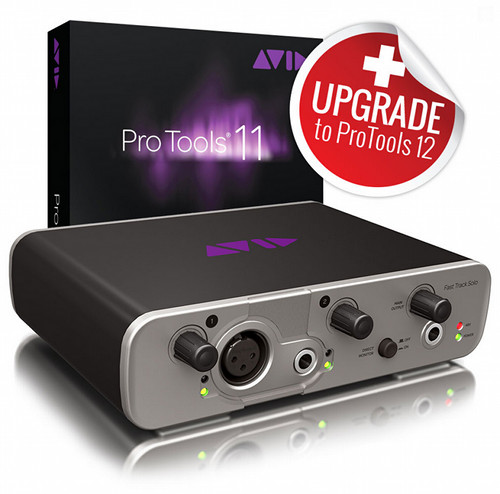 In this article I’m going to show you how to get the full version of Pro Tools 12 for just $299 (actually it’s Pro Tools 11 to start but it’ll be free to upgrade to 12 when it gets released). Not only that, but you also get a Fast Track Solo audio interface included in the deal for the $299 price.

I took advantage of this offer myself and know for sure that it is totally legit, which I’ll admit is kind of hard to believe when the full version of Pro Tools software sells for no less than $699 right now online, not unless you’re a student or have an earlier version of Pro Tools that can be upgraded.

After weighing the pros and cons of Pro Tools First, Avid’s new free version of Pro Tools 12, I decided it would be better to purchase Pro Tools software outright instead of having to deal with the free version’s limitations. Only being able to save three projects at once is a big problem.

So I started looking for ways to get the full version of Pro Tools for less than the $699 asking price. As it turns out, I discovered that Avid offers a crossgrade path for their hardware devices that makes purchasing their software a lot more affordable.

This only applies to devices that come with Pro Tools Express software, including Avid’s Mbox audio interfaces and the Fast Track Solo and Fast Track Duo.

The Fast Track Solo is the cheapest route to getting Pro Tools 12, but you can use any of the other devices to get a similarly good deal if you need a better audio interface. You can even get their highest-end model, the Mbox 3 Pro, with Pro Tools 12 for $659.

There are a few different ways you can take advantage of this deal. Alto Music is currently the main source online. You can get access to the deals at Alto Music.com and they also sell on Amazon.com. This a limited time deal that could expire soon, but it’s not the only option.

You can also buy Avid hardware anywhere else that comes with Pro Tools Express and get the option to crossgrade for $199 (see the Pro Tools licensing page). It’s a little harder to find as good of a deal this way, but it’s still possible. For instance, a lot of places sell the Fast Track Solo for $125-$150. Right now Guitar Center sells it in stores for $88.81. After taxes that works out to about the same as the Alto Music deal, maybe even a few bucks less.

The hardware packages even come with iLok 2 devices so you don’t even have to purchase one (you have to use an iLok 2 to run Pro Tools software).

So, as easy as that you can get the full version of Pro Tools 12 for under $300. You’d have to be crazy to buy the software separately by itself for $699. I don’t know about you, but I’m sure glad I stumbled across this deal. You could even sell the Fast Track Solo if you don’t need it and get an even better deal.