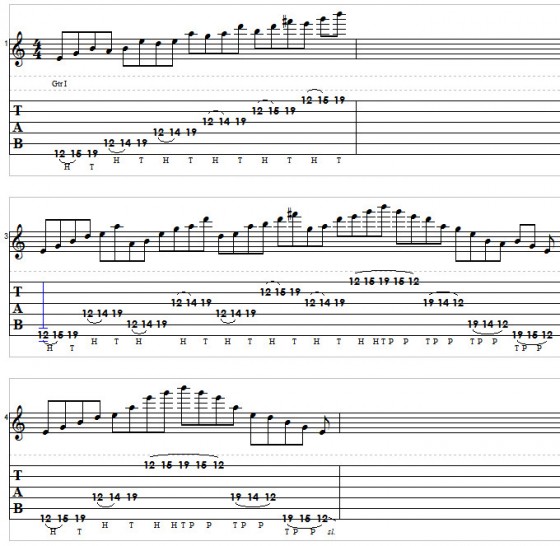 YouTube can come in handy when you want to learn new guitar techniques and note pattern combinations to experiment with to get different sounds.

But sometimes you’ll come across a badass lick or riff that you want to learn that doesn’t have any tab associated with it, as is the case with the video below.

I was looking for a cool tapping lick to learn and came across a video uploaded by John Kiernan that fits the bill.

The lick sounds pretty badass and is a relatively simple pattern. I’ve been wanting to learn it but I need some tab to work with to get it memorized, so I put together a couple tab sections using Power Tab Editor to help get it down faster, and I figured I might as well share them here in case others want to learn it as well. The tab isn’t strictly accurate but the numbers are all what they should be and are in the proper order.

The backing chords to the tapping pattern are a progression of power chords in the following order: E C A G.

The tapping lick is based on the E Minor Pentatonic Scale (all except the 19th fret on the B string but having all the taps on the same fret does help make it easier to play).

Below is a look at the tapping pattern and notes used for the lick. It’s helpful to begin with to get your fingers used to the patterns.

Here’s the tablature for the lick itself. You can also click the image at the top of this page if you want something bigger. It’s quite a bit more complicated to learn because it requires skipping strings the whole way through but it sure sounds badass!

Below is the video lesson showing exactly how to play the lick. Fast forward to 56 seconds to go straight to the song.

Lick Of The Week: Pentatonic Tapping!