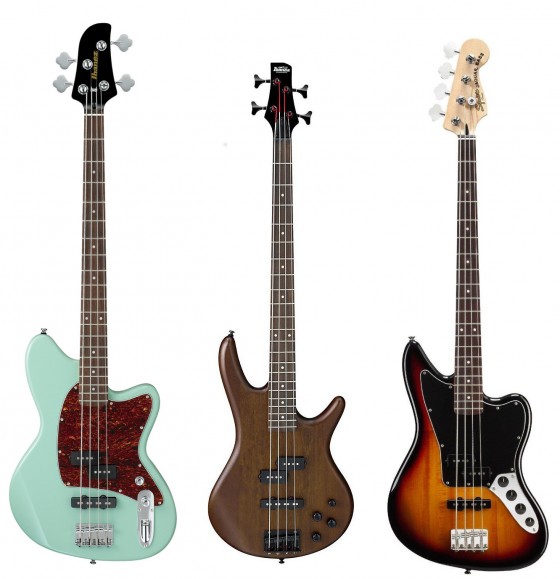 Not everyone has several hundred dollars laying around to buy a bass guitar, so this article lists the best 5 budget bass guitars for under $200.

I recently decided that I needed to buy a real bass guitar for recording projects because the bass software options that I’ve tried weren’t working well. I’m sure there are good bass plugins out there but they probably cost about as much as a real guitar.

I didn’t need something with magical wood or high-end pickups, just something good enough for practicing and for direct input (DI) recording using an audio interface.

At first I was going to get something used, but there aren’t many options where I live.

So I did a ton of research to find the best entry-level bass guitars on the market.

It turns out there are tons of brand new basses available for under $300, so that seemed like a better route to go instead of taking a gamble on a used one. You can even get something surprisingly good for under $200.

That still leaves a lot of options, but I’ve narrowed it down even further to the top 5 basses with the best overall reputation and the most positive user reviews. Actually there are only three different models; two have short scale versions. Short scale versions are a little smaller overall, with a shorter neck, but still have the same amount of frets and features as their larger counterparts.

There are tons of budget Squire basses on the market. By far the one with the best overall reputation in the budget category, and that goes for all bass guitar brands, is the Squire Vintage Modified bass. Even professional bass players with high-end bass guitars still rave about this entry-level bass.

It has an agathis body (or basswood; it varies), a maple neck, rosewood fretboard, and two single-coil pickups with active Bass Boost controls (the pickups are passive but the EQ boost requires a 9V battery like active pickups).

The Ibanez GSR line have a more mordern look than the Squire. It gets a lot of love from reviewers as being a solid beginner or budget bass.

It has a mahogany body, a maple neck, rosewood fretboard with 22 frets, and two single-coil passive pickup. The pickups have Ibanez’s Phat II EQ tone control, which boosts the signal and runs on a 9V battery.

The Ibanez GSR200 sells for $199. The short scale version has an M following the GSR name that stands for Mikro. For example the GSRM20, which sells for $179.

The Ibanez Talman bass is the sleeper pick on this list. They are a newer line (of an older series) and don’t have very many reviews or much of a reputation yet. Some early reviews complained about quality control issues, but beyond that everything else is positive.

I was ready to buy the Squier Vintage Modified bass at the top of this list—it’s a safe pick—but then decided to get this bass instead. I really like it (I’ll post a review soon). The added tone control is phenomenal and adds lots of punch and rolling lows.

The Ibanez Talman TMB-100 sells for $199 and comes in a variety of eye-catching colors. There is no short scale or 5-string version of this model, just a higher-end version with some upgrades for $299, the Ibanez TMB-300.