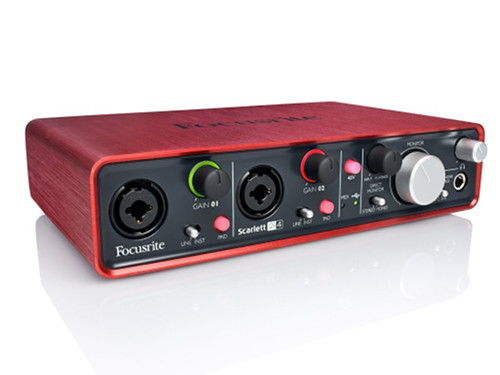 A couple of weeks ago I posted a review of the 2nd gen Focusrite Scarlett 2i2, along with a comparison review between the 1st gen 2i4.

At first I experienced a number of problems with the 2nd gen drivers for the new 2i2, but then after Focusrite updated the drivers things were working a lot smoother.

The latency is much lower on the 2nd gen Scarlett interfaces so I was happy to replace the steady and reliable 1st gen 2i4 with the new 2i2.

But after a couple more weeks of using the 2nd gen 2i2, I’ve come to the conclusion that the Windows drivers just aren’t ready for prime time yet, at least not with my Windows 7 computer.

I’ve officially switched back to using the 1st gen 2i4 and things are working so much better that it’s kind of ridiculous actually. I wish the latency was a bit lower for tracking guitars and drums but the overall performance is so much more reliable than the 2nd gen 2i2 that it just doesn’t matter to me anymore.

Sometimes the 2nd gen 2i2 works great and other times it’s downright awful. I think maybe it has a poltergeist or something.

The first major issue that I encountered was using screen capture with Ableton Live. It causes CPU spikes and crackles like crazy, making it basically unusable for that.

Then yesterday while working with Pro Tools 12 I noticed the CPU meter kept spiking and causing distortion. After wasting a bunch of time trying to figure out what the problem was, I eventually plugged the 1st gen 2i4 back in for the first time in a couple of weeks and suddenly all the problems disappeared completely.

Then I threw like twice as many plugins on the tracks and maxed out the quality settings to test the 2i4 and it handled everything as smooth as butter, while not even approaching 50% CPU usage, where the 2nd gen was choking with half the plugins because the CPU kept spiking massively.

I haven’t totally given up hope on the 2nd gen 2i2 yet. I’ll keep an eye on the downloads page to see if they update the drivers again, but if they don’t have the problems fixed in couple of weeks I’ll say to hell with the 2nd gen 2i2 for good.

Update: So the good news is that I’m back to using the 2nd gen 2i2 again. Focusrite updated the drivers a week after this post. The new drivers didn’t actually fix the problem that made me stop using the 2i2 in the first place, but while testing the update I found the root of the problem and figured out how to work around it.