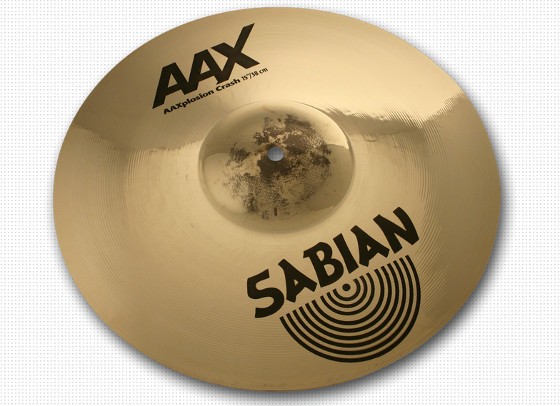 I was lucky enough to snag a couple of Sabian AAX X-Plosion crash cymbals last year on sale for $99 each at Amazon. That’s basically half price so I couldn’t pass them up even without being able to hear them in person first.

Both are medium/thin cymbals and are B20 bronze (80% copper, 20% tin). They are described as modern cymbals with a bright sound.

I was expecting the 16-inch to basically be a louder, stronger version of the 15-inch, but that’s not how it is at all.

I absolutely love the 15-inch cymbal. X-Plosion is a good name for it because it has a really great classic explosive crash cymbal sound, with a quick decay. Even at 15-inches, it has a lot of power and loudness. It’s just a great sounding crash cymbal all around and it really stands out among the hi-hat, ride, and other crashes.

The 16-inch AAX X-Plosion crash cymbal is a different story, however. I couldn’t help but be a little disappointed with it compared to the 15-inch. It doesn’t have the same explosive sound that the smaller one has. It’s a lot tamer and lower pitched. It doesn’t stand out; the tone blends in way too much with my cheap Sabian X20 hi-hats and ride.

Perhaps I just got one from an inferior batch or something. It sounds nothing like the example on Sabian’s website. Comparing the two sounds of the 15″ and 16″ is basically the exact opposite of my own experience. The 15″ is much brighter and crashier when comparing mine.

Don’t get me wrong. The 16-inch definitely does sound good in its own kind of way. And it’s a lot better than the crappy cymbals that came with my drum set, but let’s put it this way: If I’d purchased the 16-inch one first, I wouldn’t have had any interest in buying any of the other sizes, I would’ve looked at different models or brands for something more dynamic.

One edge with the 16-inch is it clearly has a better sounding bell, with a nice clear ding sound. The bell on 15-inch is pretty much unusable because it’s too dull and flat.

If you are trying to decide between the different sizes of Sabian AAX X-Plosion crash cymbals, I would most definitely suggest checking out the 15-inch version. I has such a great crash sound. With the 16-inch version, I would recommend going down to the store and hearing it in person first. I really like how it sounds when hit at the same time as the 15-inch, but by itself it’s kind of tame and doesn’t really stand out. Maybe the Fast Crash version of the 16-inch would be better.