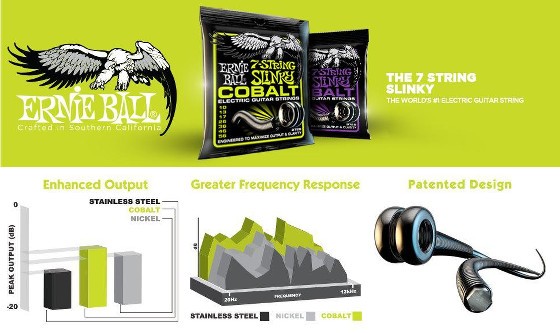 Last month I decided to order a pack of Ernie Ball Cobalt strings to try out. I’d never heard of their “Cobalt” strings before so I figured I’d give them a try.

At $10 for a pack of 7-string regulars, they cost about twice as much as normal strings. Some reviews that I read claim that they last longer so the higher price is justified.

Cobalt strings are also advertised as having an extended dynamic range, with increased low end and crisper high frequencies.

They’re supposed to produce a hotter signal as well because of a stronger magnetic pull on the pickups.

One of the main reasons I wanted to try Cobalts was because some reviewers mention that they produce less string noise. I’ve been battling unwanted string noise since I started DI recording and have been looking for different ways and techniques to minimize excess noise that strings produce.

Cobalts do have a different feel to them. There are advertised as having a soft and silky feel that makes bending easier. Personally I don’t find bending to be any different, or pretty much any of the other claims about these Cobalt strings.

I left the Cobalt strings on my Ibanez RG920 for about six weeks and I can confidently say that I will never use Cobalt strings again. Basically all the claims listed above I found to be untrue.

I compared some recordings I did with and without Cobalts, and I couldn’t notice any enhanced output (I didn’t even have to adjust the gain dial from the old strings) or increased frequency range whatsoever. The only noticeable differences is the strings feel kind of weird, like they have a coating on them, and they sound duller than regular strings.

Maybe the type of pickups has an effect. My passive Dimarzio pickups don’t react any differently to these than other strings.

Plus Cobalts aren’t any better with unwanted string noise. Not one bit. They are the same as any other string in that regard.

The Cobalts also didn’t last any longer than other strings. The G string started sounding twangy even when in tune after about a month just like any other set of strings I’ve used.

For me the Cobalts are a total fail and I won’t be buying them ever again. I didn’t realize how much I disliked them until I replaced them with a set of regular Ernie Ball strings. The difference is night and day. The Cobalt strings sound so much duller by comparison. I forgot how much I liked Ernie Ball strings. For the past couple of years I’ve been using D’Addario, and they’re okay, but these regular Slinkys seem even better, and unlike the D’Addario strings I don’t have to pre-cut the ends (the coiled D’Addario strings taper down at the ends).

So if you’re thinking about trying some Cobalt strings, I’d suggest saving yourself the money and just get the regular strings instead. Cobalts definitely aren’t worth double the price. In fact I wouldn’t use them again if they were given to me for free.