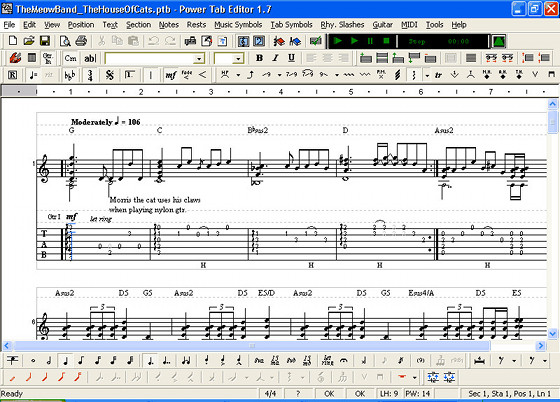 Below is a list of the best free and paid music notation software with support for guitar tablature.

I wanted to find some free software to easily create guitar tab snippets to post on this website alongside tutorials.

A lot times I’ll come across a cool lick or riff mentioned in a video or lesson online that I want to write down for easy reference instead of having to fast-forward and rewind back to where the notes are shown or mentioned over and over again.

Sometimes when you learn a new riff it pushes an old one out of your brain. A quick look at the tablature can bring the notes combinations all back again.

So without further ado, here’s the list of music notation software with tablature support for stringed instruments like guitars and bass. This list is in no particular order other than free options are listed first.

MuseScore – MuseScore is free open source music notation software with a solid amount of features. MuseScore can import and export MIDI and MusicXML files and export to PDF, image formats, WAV and other audio formats. There’s also a MuseScore Player for iOS and Android devices. MuseScore works with Windows, Mac, Debian/Ubuntu, and Linux.

Power Tab Editor – Designed for Windows, Power Tab Editor is a free tablature creating tool designed specifically for making guitar sheet music. The software includes chord names, chord diagrams, rhythm slashes, bends, slides, hammer-ons/pull-offs, harmonics and palm muting. It can import MIDI tracks and can export to ASCII Text, HTML and MIDI files. It hasn’t been updated in forever but it still works well once you get used to it.

TuxGuitar (Beta) – TuxGuitar is a guitar tablature editor written in Java-SWT. The software is free and supports GuitarPro, PowerTab and TablEdit files, and is listed as working with Windows, Mac, and Linux.

Guitar Pro 6 – One of the most popular commercial options for guitar tablature editing is Guitar Pro, which has a ton of features and includes extra goodies like importing and exporting MIDI files and playing sound libraries like drums and guitars. It sells for around $40-$60 depending on the version.

MusicEase Software – MusicEase has been developing music notation software for over 25 years, with special attention paid to creating a good user-friendly interface. The full version of their software can be downloaded and used for free; the only limitation is printouts are watermarked. To upgrade the standard version costs $80 and the Professional version is $250. The software works with both Windows and Mac computers.

Finale NotePad – NotePad is the entry-level free version of Finale’s music writing software. It works with Windows and Mac computers. But it requires setting up an account to download so I won’t be trying this one anytime soon…

TablEdit – TablEdit is designed for creating, editing, printing and listening to tablature and sheet music for guitar and other instruments. TablEdit runs on Windows and Macintosh, and Lite versions are available for iPad and Windows Mobile. The demo version is limited; the full version of the software costs $60.

Sibelius First – Avid’s Sibelius First is the big fish in the pond. Apparently it’s the world’s best-selling music notation software, according to their own claims. It costs around $120 and works with Windows and Mac computers.