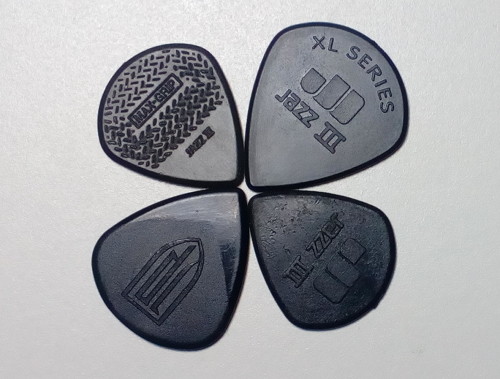 A long time ago I started using Dunlop Jazz III guitar picks. It’s been so long that I don’t remember how or when it happened, but in my opinion there is no better pick than the Jazz III.

They last so long that I hadn’t bought a new pack in years, and when I went to buy some more I found there are about 47 thousand different variations of Jazz III picks these days.

I spent some time researching the different materials and sizes, and it’s all rather confusing.

Some people like one kind better, and others hate them. Mostly it just comes down to personal preference and playing style.

I tried four different kinds of Jazz III picks and it was pretty much a waste of time.

It turns out I still like the original Jazz III pick the best; I should’ve just stuck with it instead of trying to find something better.

Here’s the list of Jazz III picks that I tried and my thoughts on each one. Feel free to leave your own thoughts in the comments section about your favorite picks.

Jazz III Black Stiffo – If you’ve never tried a Jazz III pick start with this one. It’s smaller than an average pick but somehow it’s super accurate and comfortable to play with. It’s a 1.38mm pick and it lasts longer than any other pick I’ve ever used. Lots of famous guitarist use these picks, and several have their own signature versions.

Jazz III Max Grip Carbon Fiber – This is my second favorite pick. It’s the same shape and size as the regular Jazz III above, and it feels and sounds the same, but it has more texture for added grip. It’s a good option if you have sweaty fingers, but I find that the grip is just a little too good. Sometimes I need to adjust my grip slightly while playing and it just sticks to my fingers too much. I like the regular black stiffo better because I can fine tune the placement of it while playing.

John Petrucci Jazz III – This pick is slightly larger and thicker (1.5mm) than the regular Jazz III, and at first I really liked it and thought it would be the winner. But ultimately I had problems with it being too slick. There’s not enough grip on it. After awhile of playing it just starts to slide around too much and makes my finger hit the strings. It also has a completely different tone than the regular Jazz III’s. The edge has a slicker coating that makes it slide nicely over the strings, but that makes the tone noticeably less bright—good for some situations, not good for others.

Jazz III XL Black Stiffo – The regular Jazz III is so small that I’ve always wanted a bigger version of it, and it turns out that’s where the Jazz III XL comes in. I thought for sure the larger size would make me love this pick but it turns out it’s my least favorite of the bunch. The larger size makes it too big and clunky for fast, accurate playing. I have this one song that uses fast alternate picking throughout and it’s just impossible to play accurately with this pick. It’s always getting hung up on upstrokes. The balance is thrown off with the larger size. I just can’t get it to feel right having used the smaller version for years.