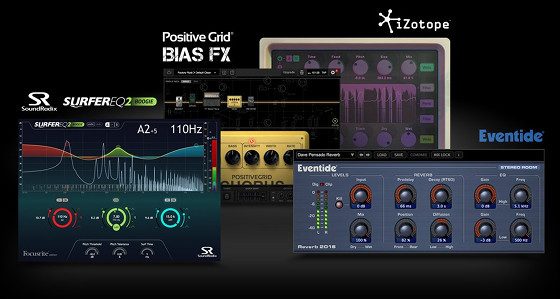 Over the past four months Focusrite has been teaming up with software developers to give away a quality plugin for free each month to Focusrite customers (or anyone who sets up a Focusrite account).

Instead of giving away a new plugin for December, Focusrite has decided to offer all four of the previous free plugins to those that missed them.

This is pretty cool because a lot of people were bummed when they found out too late to get the previous months free plugins.

Now through December you can get all four plugins for free.

Two of the plugins have been customized for Focusrite customers so they don’t have a retail value per se, but the Eventide reverb plugin sells for $199 normally and the iZotope delay sells for $49, so either way you look at it being able to get them for free is a nice perk.

The four free plugins include:

1. Positive Grid BIAS FX LE – This was the most recent freebie. It’s an amp sim pack that comes with 3 amps and 6 pedal effects. Apparently they updated it mid-month to fix the bug that made it reset to default settings every time you re-opened it so that’s a plus.

2. Sound Radix SurferEQ 2 Boogie – A 3 band EQ with a unique “surfing” mode on the middle band.

4. iZotope DDLY Dynamic Delay – It features two delays in one, with independent top and bottom settings, and analog and grain to customize the sound.

Just login to your Focusrite account to claim the free plugins.