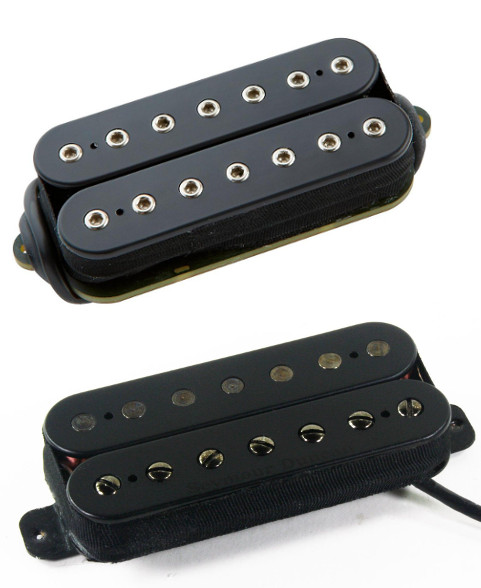 Last week I ended up buying an Ibanez RG752 off of Craigslist (I had zero plans of buying another guitar so I’m still not sure how that happened).

It came with a set of Seymour Duncan pickups, a Sentient in the neck and a Nazgul in the bridge. They were wired wrong so it sounded like shit, but that was easy enough to fix.

I wasn’t quite sure about the Nazgul, especially with a basswood body, but I wanted to give it a fair chance.

One of my other 6-string guitars came with a Dimarzio Titan in the bridge and I’ve always loved how it sounds for the style of music I play.

I wanted to see if the 7-string Titan was as good so I had to give it a try.

Before taking out the Nazgul, I recorded a few different riffs so that I could hear how it sounded compared to the Titan.

I used one of my new favorite amp sims, the blue Thermionik Diezel VH4, for the comparison.

I put together a quick video with the sound examples, but the differences are very subtle in the recordings, so I wanted to explain things in more detail here.

First off, both are very good pickups and I could get along with either of them. But for me the Titan edges out the Nazgul because it has a little bit better note separation on the low end. The low B string is more defined and it has a bit more chug with heavy palm mutes. The Nazgul has a good amount of power with palm mutes as well, but when it comes to the low B it’s spongier and less defined.

The Nazgul has better note separation on the high strings, however, and a bit more searing aggressiveness. This is most apparent on the clip labeled “grind” in the video. The D major chord has more power and definition, and just really sounds more badass than the D major on the Titan.

The Titan seems to be better balanced. The highs and lows fit together very nicely, even when played together at the same time, whereas the highs seems to stand out a little more with the Nazgul.

It’s hard to explain, but the biggest difference between the two pickups comes down to the response while playing. The differences in the recordings is minimal, yet in person while jamming there’s just something about the Titan that sounds and feels better to me. Maybe it’s because I’m so used to it with the 6-string version I’ve been playing for the past year. It just really fits my style well. It’s my favorite pickup so it’s a hard comparison for the Nazgul, but I like its aggressiveness as well. It’s hard to go wrong with either of them when it comes to metal!