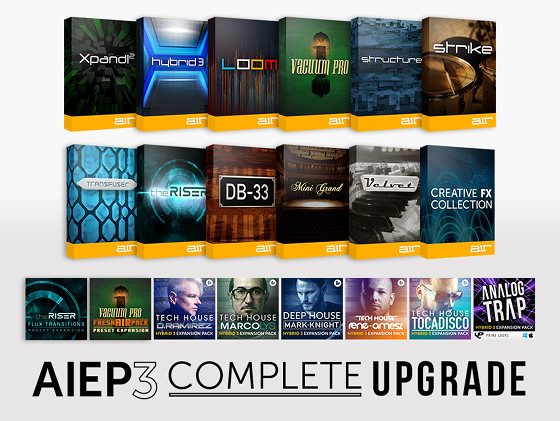 Basically you can get most of the gear that AIR has to offer for a grand total of $91. It’s a really good deal considering that most of their plugins usually sell for more than that individually.

The bundle deal runs through August 2016.

In order to get the complete bundle for $90, you need to already own an AIR plugin to get the special “upgrade” price.

If you don’t own an AIR plugin, then all you have to do is purchase the Xpand!2 plugin from Plugin Boutique for $1, which is a great deal too since it usually sells for $99.

Being able to get all these AIR Music plugins and expansions for less than the regular the price of a single plugin is pretty cool.

The AIR complete bundle includes over 70GB (more like 100GB) of samples, loops, effects, and over 2,000 patches and presets.

The AIR plugins work with Mac and PC in 32 and 64 bit. The plugins are available in VST, AU, and AAX formats.

There’s also the option to forgo the Hybrid 3 expansion packs to just get the plugins for $78 instead.