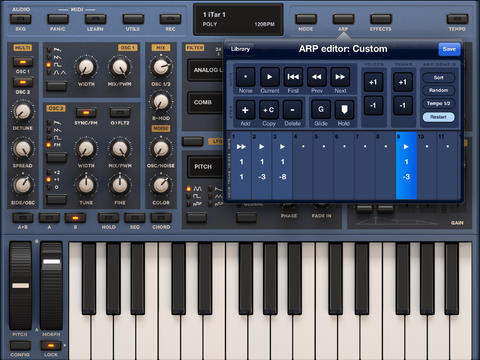 The iPad and iPhone have become popular audio production tools, and you’d be surprised by the quality of some music-making apps.

There are a bunch of different synthesizer apps for iOS. Some people even claim they are better-sounding than what you can get as VST plugins.

Among the best iOS synth apps are Animooog, Sunrizer Synth and Korg Gadget.

In no particular order, here’s a list of some of the most popular synthesizer apps for iPads and iPhones.

The first two apps on the list are free, everything else is paid.

Feel free to add suggestions for other synth apps in the comments section.

Yamaha Synth Book – This app provides a history of Yamaha synths and it includes a free AN2015 synth that features virtual analogue modelling like the AN1x.

DRC – Polyphonic Synthesizer – A virtual analog polyphonic synth. It’s free to use but does include in-app purchases.

KORG Gadget – This is a very popular app that comes with a collection of over 20 different synthesizers and drum machines.

Sunrizer Synth – A virtual analog synthesizer that works with any MIDI keyboard or sequencer.

Model 15 – Each facet of the Moog Model 15 modular synthesizer has been meticulously recreated in this application to ensure the power and transcendent sound quality of each module remains intact.

Thor Polysonic Synthesizer – From Propellerhead, Thor is modeled after Reason’s flagship synth. It includes over 1000 synth patches and you can create your own.

ThumbJam – Includes over 40 high-quality real instruments multi-sampled exclusively for the app. Hundreds of included scales allow you to effortlessly play in any style from rock to classical, whether you are a musical novice or a seasoned professional.

ARP ODYSSEi – A mobile version of the ARP Odyssey reproduction that uses KORG’s proprietary CMT circuit modeling technology to reproduce the analog feeling and sound of the original.

Troublemaker – Not a TB-303 but provides a similar vibe. Troublemaker sports a carefully crafted diode filter emulation and among the available oscillators are the typical raspy, nasal sawtooth and rubbery squarewave with its oddball shape and shifting pulsewidth.

FM4 – FM4 is a four operator FM synthesizer for iPad that is modeled after the DX series from the 1980s.

iSEM Synthesizer – A recreation of the classic 1974 Oberheim SEM (Synthesizer Expander Module), one of the world’s first self-contained synthesizer modules and the first to bear the “Oberheim Electronics” name.

WaveMapper – PPG WaveMapper is the second next-generation iOS based synth from Wolfgang Palm, who in 2012 released the PPG WaveGenerator to critical acclaim from both press and public.