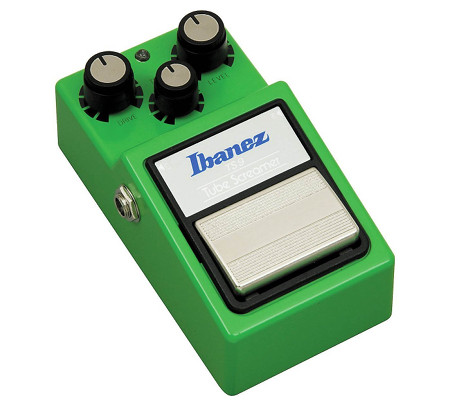 It’s crazy how many different cheap tube screamer clones that are available these days. Not only that but the prices for some are dirt cheap, and you can even get one delivered to your door for under $20.

I’m a cheap bastard so there’s no way in hell I’m going to drop $180 for an official Ibanez TS808 tube screamer pedal.

Hell, I don’t even want to spend $140 for the highly-popular Maxon OD808 reissue pedal.

I just want something cheap to tighten up the low end and boost the signal in front of a Peavey 6505 MH. Plus you can’t deny a tube screamer some good blues licks.

After some research it seems the DigiTech Bad Monkey is a popular inexpensive choice for around $50, but unfortunately it’s been discontinued so now you can only find them used on sites like eBay.

Meanwhile you can score a used Ibanez TS9 for about the same price so going with it makes more sense. New they go for $99 so they’re a top option under $100 but that’s still a lot to spend on a single pedal.

A popular alternative is the Boss SD-1. It’s a distortion pedal, not a tube screamer, but it can achieve similar results, especially when used a boost. It’s a good inexpensive option because it sells for only $49 new.

But if you want to go even cheaper than that, there’s the Joyo JF-01 Vintage Overdrive pedal. It sells in the $25-$35 range brand new. It’s a typical tube screamer clone with a JRC4588 chip. It has lots of positive reviews online; some people even like the sound of it better than the more expensive options so it’s a solid pick for the price.

One of the cheapest tube screamer pedals of all time is the Behringer TO800, currently priced at $19.99 new. A lot of people have posted reviews of this model and the general consensus seems to suggest that it actually sounds surprisingly good considering the price, but the main catch is it’s made of plastic instead of metal like most pedals, so it takes a hit in the durability department.

You might think that’s as cheap as a tube screamer pedal can get, but there’s one called the Nux OD-3 that sells for as little as $18.88 new on eBay with free shipping. There aren’t many reviews to be found for it though so it’s more of a gamble, but it’s a nice-looking pedal for the price.