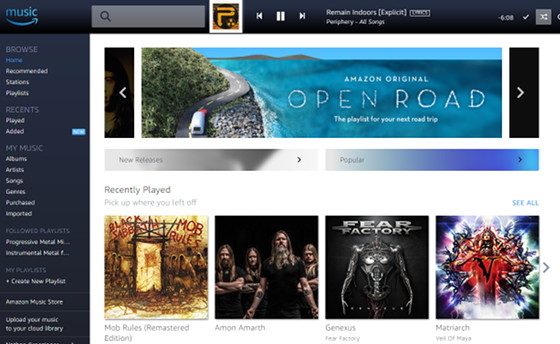 I never paid much attention to it until recently, but Prime Music turned out to be the main reason I decided to pay for another year of Prime membership—I didn’t want to give up all the good songs that I’ve added to my account

First off, there’s a surprisingly good selection of metal and hard rock albums.

A lot of bands seem to have their earlier albums available, a sensible tactic to gain more fans so then you’ll want to buy their newer work.

Some have newer stuff available too, so there’s a varied selection of titles to choose from.

I’ve been listening to Pandora for years but I get sick of how repetitive it is (with over 50 stations set to shuffle they still play the same songs everyday).

A lot of the music on Amazon is stuff that I never hear on Pandora.

I just go to the main songs list and set it to shuffle between all songs, and it includes purchased songs as well so everything gets mixed together into one giant playlist.

It’s also cool that you can download all the Prime Music songs to listen to offline. You can play any song or album anytime, unlike with Pandora’s streaming.

The only downside is when bands decide to remove their album from Prime Music, then you’ve got to manually remove it because it’s just taking up space.

I wasn’t expecting to like Prime Music very much because I didn’t think the selection would be very good but it’s actually pretty decent and there seems to be lots of stuff that doesn’t play on Pandora.